The world is waiting to hear our stories - Lai Mohammed 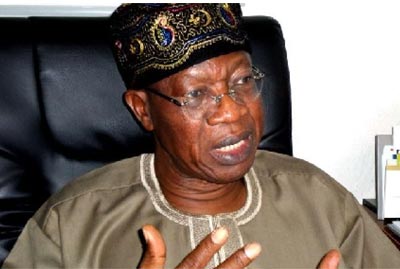 Minister of Information and Culture, Alhaji Lai Mohammed, says the world is eager to hear the nation’s stories through the creative industry and ready to pay a lot of money for it.

The minister said this in Lagos at the inauguration of “My Africa Reality TV Show,” that seeks to promote the African culture, tradition and values.

Mohammed said that his assertion was evident by the runway success of the dance drama ‘Wakaa The Musical’ which was performed to global acclaim in London recently.

He said what was needed was to make creative products of the right quality and accessible to all.

The minister congratulated the organisers and producers of the new reality TV show, adding that he was confident that it would massively succeed.

He said the show was coming at a critical point the country was seeking to lay the proper foundation for a very vibrant and productive economy.

“This show is the type of production that we need at this time, because it promotes other aspects of our economy, it creates jobs and educates our people.

“By the time we conclude the ongoing digitisation of the broadcast industry, we will have opened up several revenue and marketing pipes for monetisation of such shows and a window to the world,” he said.

The minister noted that the free fall of oil prices was a blessing in disguise.

He said the free fall had pushed the country to harness its natural and creative resources to build a new economy that would not be dependent on just natural resources.

Mohammed called on Nigerians to chart a path for the development of the nation’s creative industries.

He said the focus of his ministry was mass creation of jobs and development of skill and managerial abilities of Nigerians.

Mohammed said the ministry would also focus on formalising and growing the export of all aspects of the industry to become a significant foreign exchange earner for the country.

He said it would similarly provide key infrastructure that would encourage local and foreign investments into all the key aspects of the creative Industries.

“We have identified TV, Music and Film production as a major component.

” We are working on what exactly should be provided, what type of laws, subsidies, financing, infrastructure etc will be required to achieve the desired goals,” he said.

The chairman of the occasion, Dr Adewale Adeoye said the reality TV show would showcase and tell the world the true stories about Africa and correct the distortion being bandied around.

He said the concept was also to promote African culture and tradition through dance, songs, comedy and drama.

The host of the reality TV show, Melvin Oduah said the audition for the first edition would hold only in Nigeria while the subsequent ones would be done across the continent.