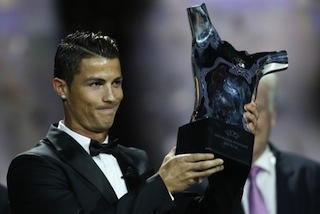 Real Madrid and Portugal superstar Cristiano Ronaldo has won the UEFA Best Player in Europe award for the second time.

The forward, who first won the award in 2014, scored the winning spot-kick as Madrid beat Atletico in the Champions League final on penalties in May,

And Ronaldo then went on to help Portugal to their first international title with victory at the Euros, scoring three goals during the tournament.