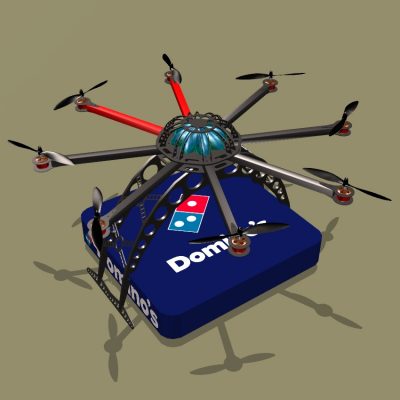 Domino’s Pizza on Thursday said it would begin trial use of drones to deliver pizzas in New Zealand in what it said was the world’s first.

The company posted pictures of the delivery-drone on Facebook and said it aimed to begin aerial pizza deliveries to its New Zealand customers later this year.

The carbon-fibre drone has been developed in partnership with U.S. delivery-drone company Flirtey, and is designed to lower its cheesy cargo to pizza lovers via a tether.

Domino’s said the drones, which use military grade autopilot technology and encrypted communications, would zoom along at 30 kilometers per hour, flying at an altitude of approximately 60 meters.

The drones will initially only be used in calm weather, with the company opting to revert to traditional delivery methods during periods of high wind and rain.

The initiative was welcomed by Transport Minister Simon Bridges, who said Domino’s had chosen New Zealand for the trial because of the country’s forward-thinking aviation rules.

“I have been actively promoting New Zealand as a test bed for new transport technology trials,” Bridges said.