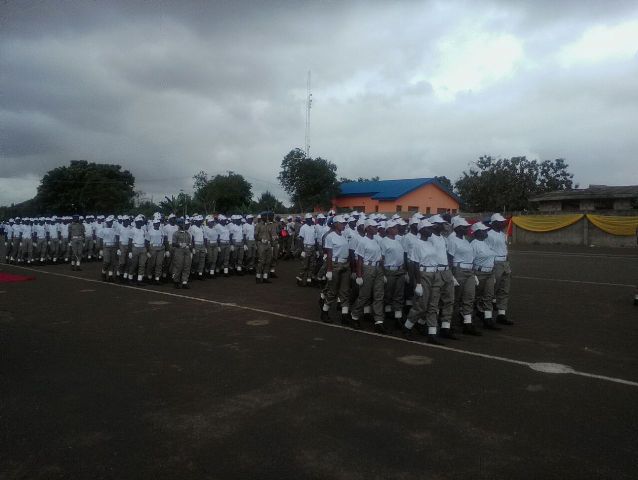 PCN Cadets on parade at the NYSC Campground, Agege.

The Peace Corps of Nigeria, PCN, has recruited 2,800 youths across the nation to help in the fight against social vices among youths in the country.

After undergoing intensive training for four weeks, the 2,800 cadets were graduated on Saturday at the National Youth Service Corps, NYSC, campground in Agege area of Lagos, Southwest Nigeria and were immediately converted to staff of PCN.

National Commandant, PCN, Dr. Dickson Akoh, while speaking during the event said the 2,800 cadets were drawn from Lagos and other neighbouring States within the South West into the Staff Officers’ Cadre of Peace Corps of Nigeria, having successfully completed their statutory one month initial training and orientation exercise.

He said the youths being commissioned to Staff Officers’ Cadre, were subjected to a 4-week intensive training and orientation, emphasizing that the tasks ahead of them were quite enormous.

“Thus, while urging you to diligently perform these envisioned tasks, you are to note that in winning the support of the government and the citizenry, you have to be more civil and people-friendly in discharging your functions. Be guided by the fact about the huge responsibilities and the demands of your new status after your commissioning. Note therefore that hard-work and discipline without positive attitude could lead to avoidable failure.

“Fellow officers and gentlemen cadets, with the prevalence of social vices and violence among the youths which pose potential threat to peace and security of the nation, I urge you to see it as part of your patriotic duties by co-operating with the various security agencies towards finding a lasting solution to these ugly trends and in enthroning lasting peace in the country.

“This is in view of the fact that the change agenda of Mr. President will remain a dream without an atmosphere of peace. Suffice to add that for the present administration’s vision for sustainable development and nation building to be actualized, you must complement her effort in the promotion of peace and harmony,” he said.

Akoh charged the youths to be closer to the grassroots and more strategically placed to complement the security agencies through intelligence gathering on matters that might lead to breach of peace and security.

However, he said the Nigerian Peace Corps Bill before the House of Representatives third reading while the same bill was also at the second reading on the floor of the senate, adding that the bill, when passed into law and assented by the president would lead to the takeover of the organisation by the Federal Government.

“By this singular development, the 8th National Assembly has demonstrated the unwavering passion and commitment towards addressing the challenges of youth unemployment and its social consequences in Nigeria. It is worthy to note that Nigerian youths have over the years yearned for a deliberate government’s policy aimed at genuinely empowering them.

“Thus, the step taken so far by the National Assembly is a sign post that this long expected dream and aspiration is being placed at the front burner by the present administration of President Muhammadu Buhari,” he stated.

Akoh, however, said PCN had been operating in Nigeria for over 18 years and currently has over 135,000 men across the 36 states of Nigeria and the Federal Capital Territory.

Speaking, Lagos State Governor Mr Akinwunmi Ambode challenged the organization to continue to champion the peace crusade. He expressed optimism that the PCN would surmount its present challenges, especially as soon as the Nationally Assembly gave a statutory backing to it.

“It is marvelous seeing what has happened today and looking at what had been touted that the Peace Corps is a dubious organization; one can now see that it a genuine society, I am aware that it (PCN) is recognized by the United Nations charter before coming for recognition at the National Assembly.”

“The Peace Corps of Nigeria bill is now at the third reading in the Senate and I believe by the time it is passed into law, it will alleviate some of the challenges they are having now,” he said.