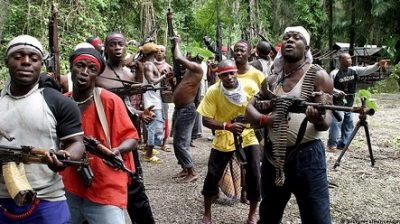 Ever since oil was discovered in the Niger Delta more than sixty years ago, the lives of the people there have been blighted by widespread ecological and environmental pollution. It has reduced people’s life expectancy, led to the abandonment of their primary occupations as farmers and fishermen as oil pollution has destroyed both land and fishing grounds. There is widespread unemployment and general unrest. This has led to general dissatisfaction amongst the people and is partially to blame for the renewed calls for the re-establishment of the defunct Biafra republic.

Disillusioned and unemployed youths have taken to arms destroying pipelines and installations and kidnapping oil workers in a bid to get something back. These groups go by many names and the notable of all, presently, is the Niger Delta Avengers – who are currently negotiating with the government. Apart from frequently wreaking havoc on oil installations they also frequently battle each other. In the past fifteen years the Federal Government has had to frequently send troops down to the region to try and restore law and order.

Unfortunately the damage is done. The multi- national oil companies operating in the region have been allowed to get away with so much for so long considering the fact there are no laws in Nigeria forcing them to clean-up or invest in the areas. Also over the course of over fifty years the oil companies have colluded with both military and civilian governmental officials to have things their own way. The 1995 execution of the environmentalist/writer Ken Saro Wiwa exposed BPs complicity in his death and connivance with the then government of the late Sanni Abacha.

In recent years there have been attempts to appease the warring militants of the region to the extent of bribing them to lay down their arms and sending some abroad to gain further education. There have also been feeble attempts at a clean-up operation.

Unfortunately both attempts have failed. Paying off the militants hasn’t convinced them to lay down their arms. Not only is it not a lasting solution to the problem it has encouraged rogue splinter groups to emerge to earn ‘easy money’ from the government. Leaders of such groups have become tin gods who have splashed out money received on 4X4 jeeps and a luxurious lifestyle ignoring the masses they claim to represent. And the clean-up of the polluted areas will take forever – if an attempt is even made to start.

Nothing will work until the Federal Government forces the oil companies to take full responsibility for their actions. When the BP- operated DeepWater Horizon oil rig exploded in 2010 killing eleven workers and causing a massive oil spill in the Gulf of Mexico the American government not only forced BP to clean-up but fined the company more than $4 Billion Dollars- and that’s not counting other pending private lawsuits against the company. This money will be used by the government to compensate and rehabilitate all those affected by the disaster.

Though it will be virtually impossible to get the oil companies operating in Nigeria to agree to do a clean-up a forced levy can be imposed upon them for re-development of the region.

Call it a ‘Niger Delta Re-Development Fund’ where monies collected from the oil companies will be used to relocate worst-affected smaller communities(if need be) to new settlements, to provide social amenities, education and most important of all – employment!

Someone robbed of their health and livelihood by oil pollution is bound to turn to mischief. The oil industry is a vast industry that employs thousands of workers every year. Why not make it a priority to recruit, exclusively, from the local indigenes first? Why not give the job of clean-up operations to these Niger militants to keep them out of trouble? The oil industry has a lot of tertiary companies that support their operations. Why not force these companies to re-locate to these districts or get them to establish branches in theses improvised areas? If you establish a company, for instance, that dry cleans/launders workers overalls and employ fifty local people you are actually taking fifty people off the street who might otherwise be troublesome.

Also, education is very important here and should not be forgotten. Most of the militants, currently terrorizing the region, are in their late teens or early twenties and giving them access to a good education will give them a better chance in life. Already some schemes are in place that provides scholarships but it needs to be more widespread.

Establish a tax-free or low-tax zone to encourage both domestic and foreign investors. Foreign trawlers who come to fish off our waters would more than likely be interested in owning a processing plant in such an area instead of having to freeze their catch and cart it off to their countries.

Since the discovery of oil in the Niger Delta all the indigenous cottage industries have all but disappeared. With proper funding, probably from government backed micro-finance banks, this can be revitalised. This will give the local indigenes an alternative source of income to what they’ve lost from farming and fishing.

Bribing militants or confronting them, leaving oil companies un-governed and un-checked and coming up with impossible schemes to clean-up the pollution will never solve the Niger Delta problem. Getting the Niger Delta militants educated, employed and out of trouble and dealing with the oil companies with a more firmer hand will.