'Pickpocket' chairman, 21 others arrested in Lagos 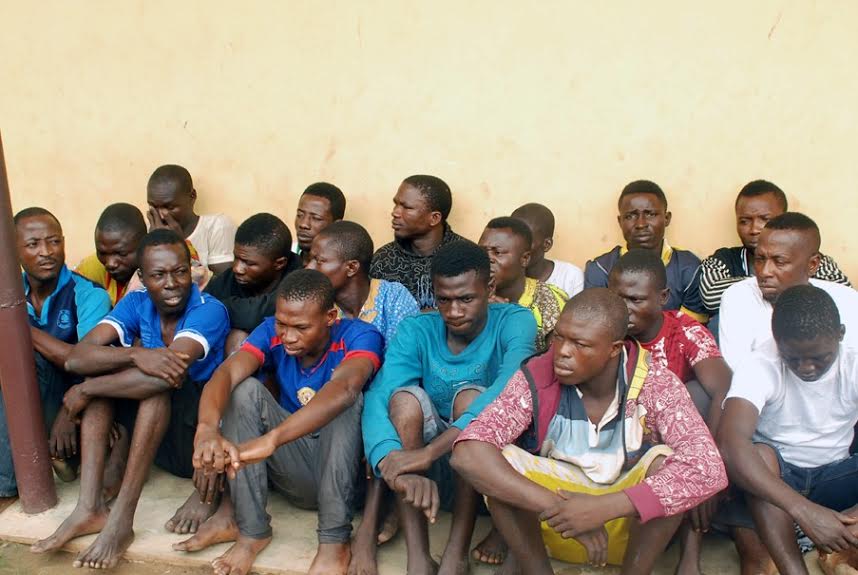 A cross section of pickpockets arrested

The operatives of Rapid Response Squad (RRS) have arrested a self-acclaimed Chairman of pickpockets in Oshodi, Ibrahim Kasali, and 20 other suspects alleged to be involved in stealing and robbing innocent members of public in the area.

The raiding, which took place at about 4:30 a.m. and ended at 6:35 am on Friday witnessed the operatives combing Mosafejo, Bolade, Oshodi Oke, and Oshodi Under Bridge, arresting the hoodlums and social miscreants waiting for early rush to rob passers-by and passengers.

The suspect who is popularly known as ‘Ibrahim Babangida’ of Oshodi, was nabbed during the operation while being chased by passengers of a bus which he boarded to pickpocket.

It was gathered that Kasali is feared by his colleagues for his ruthlessness and popularity. “some of his colleagues earlier arrested gave him out as their leader, and that he is the one who goes around to collect items stolen or snatched from passers-by to sell and share the proceeds to all of them”, our source added.

Kasali, the source noted had been to prison four times, while one of his accomplices also arrested, Ibrahim Yusuph, 18, from Ogun State, was just out of prison for the eighth time.

Upon completion of preliminary screening, four out of 21 arrested suspects, who could provide satisfactory information about their identity, were released.

Confirming the arrest, the Police Public Relations Officer, PPRO, Superintendent of Police, SP Dolapo Badmus, re-assured Lagosians of maximum security in the state, adding that the suspects would face the full wrath of law.

The suspects have been transferred to the Lagos State Taskforce on Environment for prosecution.