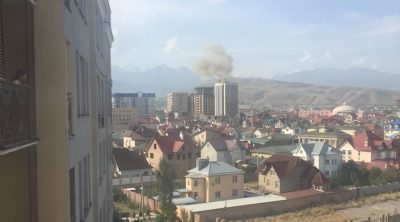 A car driven by a suicide bomber exploded after ramming through a gate at the Chinese embassy in Kyrgyzstan on Tuesday, wounding three people, authorities said.

Razakov said the three wounded were all Kyrgyz employees of the Chinese embassy and that they had been taken to hospital. Local medics said their injuries were not serious.

Bishkek police sources said that a Mitsubishi Delica car smashed through a gate at the embassy before blowing up in the centre of the compound close to the ambassador’s residence.

Another source from the security service of the ex-Soviet Central Asian nation which borders China said an “explosive device” had been placed inside the vehicle.

Local residents said that the blast had blown in their windows and caused their houses to shake.

Employees from the Chinese and nearby American embassy on the edge of the city were evacuated, the Kyrgyz emergency service said.

The economically troubled ally of Russia has seen two governments overthrown and ethnic violence claim hundreds of lives since it gained independence in 1991.

The authorities regularly announce that they have foiled attacks planned by the Islamic State group in the country.

Officials say that some 500 Kyrgyz are thought to have joined the ranks of Islamic State fighting in Syria and Iraq.

Chinese officials in the country have previously been targeted, with one shot dead in 2000 in an attack blamed on radicals from China’s Uighur minority.

Kyrgyzstan and the other ex-Soviet Central Asian nations have come under fire for using a purported terror threat to silence criticism of their secular regimes.