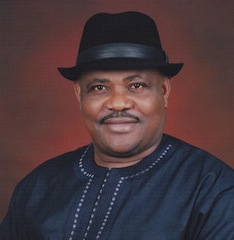 The Rivers State chapter of the People’s Democratic Party has stated that Governor Nyesom Wike was not under any threat of impeachment.

Samuel Nwanosike, the State Publicity Secretary, on Monday said in Port Harcourt while briefing newsmen, in reaction to a statement credited to Dr. Dakuku Peterside, the governorship candidate of the All Progressives Congress in the 2015 general election.

Peterside had predicted that the regime of the governor would soon come to an end, adding that the people could not be deceived with lies and propaganda, no matter how well crafted the lies were.

But Nwanosike said, “Dakuku Peterside should know that the governor cannot be impeached because, in the state House of Assembly, the PDP is in the majority. The issue of the governor’s regime coming to an end cannot come up.

“Governor Wike is using the resources at his disposal to develop the state and that is why he will continue to enjoy the support of the people. They can try as much as they can, they cannot do anything to Governor Wike,” the state PDP publicity secretary said.

“Rivers State is PDP. We have got up to the Supreme Court and we won. So, to say that Wike’s administration will soon come to an end does not make any meaning to us,” he added.

Mr. Chris Finebone the state Publicity Secretary of the APC, while reacting to the development disagreed with Nwanosike, saying that Rivers remains an APC state.

“Rivers State is not PDP. People were saying Nigeria was PDP until APC won. It is sheer empty talk to say that Rivers State is PDP. Rivers belongs to the APC and will remain APC,” Finebone said.