US commercial flight lands in Cuba first time in 50 years 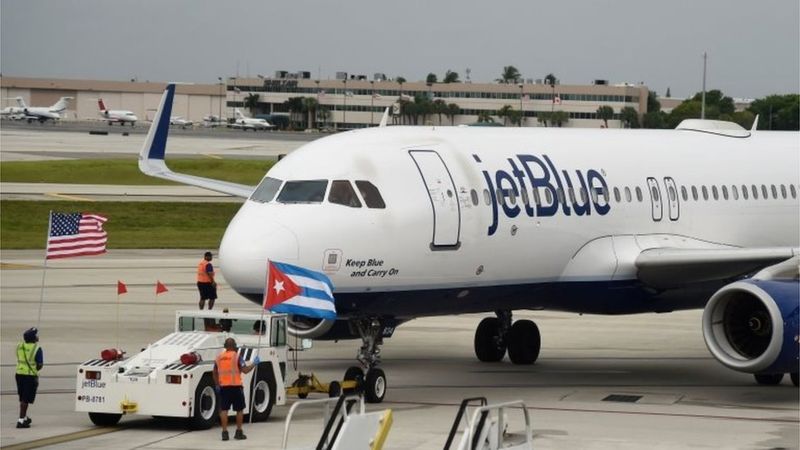 The US plane that landed in Cuba-AFP

A US commercial flight has arrived in Cuba for the first time in more than half a century.

JetBlue Flight 387 had 150 passengers, including US transport secretary Anthony Foxx.

The plane took off from Fort Lauderdale, Florida, at 09:45 EDT (13:45 GMT) and landed in Santa Clara in central Cuba about an hour later.

The flight marks the latest development between US and Cuba since they restored diplomatic ties in December 2014.

The last time an American airline flew scheduled service to Cuba was more than 50 years ago on a propeller plane, according to Marty St George, the executive vice president of JetBlue.

To commemorate the occasion, the plane received a water cannon salute, which traditionally marks a special occasion for a ship or aircraft.

Since the US thawed relations with Cuba, embassies have been re-opened in Washington and Havana, President Barack Obama visited the country and a US cruise ship sailed to the island nation in May.

The Obama administration has approved 10 US-based airlines for regular passenger jet service to Cuba, offering as many as 110 daily flights.

Tourism to Cuba is still banned in the US, but the Obama administration eased rules last year to make it easier for Americans to access the long-isolated nation under 12 categories of “authorised travel.”