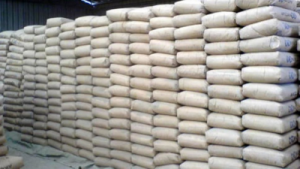 Two cement dealers in Umuahia have expressed concern over Monday’s sharp increase in the retail price of cement, saying that it would compound the housing deficit in the country, if not checked.

Speaking on the development in separate interviews with the News Agency of Nigeria (NAN) in Umuahia on Friday, they said that they were jolted by the hike.

They said that the hike had caused a lull in their business with an attendant drop in their daily sales and income.

Mr. Iheanyi Omeokwe, a major dealer at the Umuahia Industrial Market, said that the hike would negatively affect the building industry.

Omeokwe, who is the Chairman, Building Materials Association, said that the new price would make it difficult for many Nigerians to build their own houses.

“We are deeply worried over the sharp increase in the price of cement. Already, with Monday’s price hike, our sales have dipped.”

He said that many individuals who were building houses suddenly suspended work as soon as the new price regime came into effect.

He said that cement dealers were the worst-hit and expressed fear that many of them might soon go out of business.

“If you used to place an order for 100 bags before, now you can only order for 50 bags with low sales, then gradually you will find yourself shutting down,” Omeokwe said.

Another dealer in the market, Mr. Obinna Elijah, spoke in the same vein, saying that the sharp price increase “spells doom for cement dealers across the country.

“You can see that the whole market is dull. I was sleeping and at a point, I decided to walk around to shake off sleep.

“This is the situation we have found ourselves since Monday when the new price regime took effect.”

He decried the percentage of the increase, saying that price hike in the past was usually between N50 and N100 per bag.

“The current hike of almost 50 percent has never happened before,” he said, adding that the news of the hike came as a big surprise to them.

“We did not have any inkling that there would be a price increase. Last Saturday, we sold a bag at the old price of between N1,450 and N1,500.

“Surprisingly, when we came to market on Monday, we were told by distributors that the price had gone up.

“We heard the news like every other Nigerian,” he said, adding that the increase had slowed down business.

A dealer in ceramic tiles, Mr. Emmanuel Okereke, said that the increase in the price of cement also caused a drop in the demand for tiles in the market.

“Tiles are fixed with cement and often in new buildings. With the drop in the number of new buildings springing up, our business is also affected,” Okereke said.

A civil servant, Mr. Peter Ogboso, who is also into property development, decried the sharp increase in the price of cement.

Ogboso feared that the new price could discourage prospective land developers, adding that it would also aggravate the accommodation need of the populace.

The respondents urged immediate Federal Government intervention in order to salvage the situation.

They said that since the hike was caused by the high foreign exchange rate with N420 exchanging for one dollar, the government should give concession to cement manufacturers.

They opined that the concession would help them to import the chemicals for the production of cement.

They also called for the construction of more cement factories and the revitalisation of the ones that had gone moribund over the years.

“This will help to boost production to meet the demand for the commodity and make it affordable in the country,” Ogboso said.