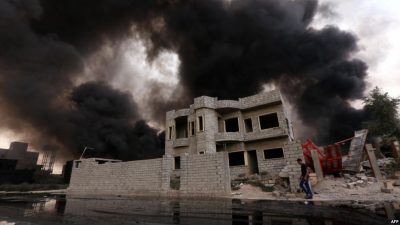 An Iraqi man walks near smoke billowing from oil wells, set ablaze by Islamic State militants before fleeing the oil-producing region of Qayyarah

As Islamic State fighters are being routed from cities and towns across Syria and Iraq, they increasingly leave behind carnage, causing major damage to local economies and devastating people they already have traumatized.

A VOA reporter this week visited a town that was held by IS until last week, when Iraqi forces pushed the fighters out. The oil-rich town of Qayyarah, 60 kilometers south of Mosul, was under IS rule for more than two years. IS militants made certain that Qayyarah’s infrastructure was damaged before they were defeated. Houses were partially or fully destroyed. Oil wells were set ablaze, causing major damage to the economy and the environment. At least 10 oil fields were burned down, local sources said.

“IS targeted oil fields knowing it was people’s money,” said Hussein Jasim, a resident of Qayyarah, referring to the Iraqi economy.

The city’s military base also was wiped out, according to Iraqi military officials.

“The base is not usable now,” said Colonel Karim Radwan, an Iraqi military officer who led the offensive against IS there. “IS bombed the infrastructure of the base.”

Qayyarah’s airbase was a key installation for the Iraqi air force before it was captured by IS in June 2014. The base also was used for several years by U.S. forces after the U.S. intervention in 2003.

Radwan said it will take a long time and a large investment to repair the airfield.

Residents said they lived under IS extortion and suffer psychologically from IS occupation.

“We paid them a lot of money,” said resident Jasim. “We either had to pay them or get slaughtered.”

Many residents say widespread destruction in the town means they will not return home anytime soon, despite IS fighters having been cleared out. Many of the residents have fled to the Kurdish region of Iraq or nearby areas under the control of the Iraqi government.

“I fled with my family as the [Iraqi] forces were liberating [Qayyarah],” said Wahid Khalaf, another resident.

He and his children walked for seven hours to reach safety, “taking many dangerous routes,” Khalaf told VOA.

Another resident who refused to be identified said thousands of families were devastated due to IS terror activities in the town. “These families have no homes or anything. They have nowhere to go,” he said, pointing to fleeing residents crammed in the back of a truck.

IS’s intention is to inflict lasting suffering after it is pushed from towns, analysts say.

“This is exactly what IS wants,” said Hamid Majeed, an Iraqi political analyst. “They want to show people that their lives would be even more miserable after they [IS] no longer control their territories.”