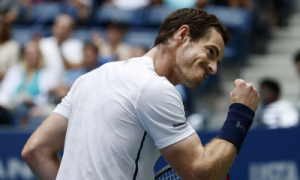 Andy Murray after he managed to defeat Paolo Lorenzi

Second seed Andy Murray had to change tactics after two sets before he could beat 34-year-old Italian veteran Paolo Lorenzi to advance to the U.S. Open fourth round.

Murray was mopping and muttering to himself as he pressed for winners against the steady Italian and piled up unforced errors before deciding to patiently play long rallies.

World number two Murray committed 47 errors in the first two sets, including 31 off his forehand, and converted only 4-of-12 break points before finding his form in the third set.

The 40th-ranked Lorenzi put up a gritty fight in spite of coming off a gruelling five-set, five-hour win over French 30th seed Gilles Simon in his second-round tilt.

The Scotsman’s harder-than-expected three-hour 17-minute victory kept his golden summer moving forward after triumphs at Wimbledon and the Rio Olympics.

Lorenzi is also enjoying a stellar season, logging his first victory ever on the ATP Tour.

The News Agency of Nigeria (NAN) reports that he became the oldest first-time champion by winning at Kitzbuehel, and adding two semi-finals and a quarter-final to his credit.

“I stopped rushing in the rallies,’’ 2012 U.S. Open winner Murray said in an on-court interview. “I was making quite a few unforced errors.

“He’s an extremely solid player and doesn’t give you many cheap points. I was trying to get cheap points, I was going for too much.

“When I slowed things down and waited for the right shot to go for, my unforced errors went down, the winners went up and the scoreboard started working in my favour as well.”

Murray advanced to a fourth-round clash with 22nd seed Grigor Dimitrov of Bulgaria, a 6-4 6-1 3-6 6-2 winner over Joao Sousa of Portugal.

The second seed said he did not overlook Lorenzi.

“He’s ranked 40 in the world. He’s pretty good. So I expected a tough match. I expected long rallies, I’m just disappointed with the amount of errors I made,” Murray said.

“That cost me in the first and second sets.”

Murray was impressed with the fortitude of the Italian, who battled the Scot through a brilliant 42-stroke rally in the second set among many long exchanges.

“After the match he had a couple days ago, to come out and move like he did and work as hard as he did out there shows that’s a huge quality of his and it gets you a long way,” Murray said.