Ronaldo scores on his comeback as Real beat Osasuna 5-2 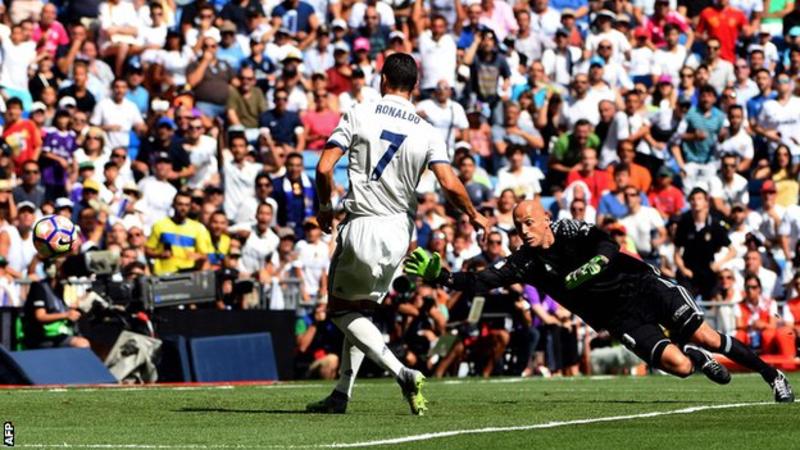 Cristiano Ronaldo took six minutes to score on his comeback as Real Madrid beat Osasuna to keep up a 100-per-cent La Liga start.

Ronaldo, back from a knee injury picked up with Portugal during the Euro 2016 final, tapped in Gareth Bale’s cross.

Danilo drove in a second just after Unai Garcia hit the bar for Osasuna.

Sergio Ramos and Pepe both headed in Toni Kroos corners, and Luka Modric bent in a fifth, before Oriol Riera and David Garcia pulled two goals back.

The visitors – who also had a penalty saved as Kiko Casilla denied Roberto Torres – finished with 10 men as full-back Tano Bonnin was shown a second yellow card for pulling back Nacho.

His return from injury has come at a very good time for his club, as they prepare to begin the defence of their Champions League title with their opening group game against his former club Sporting Lisbon at the Bernabeu on Wednesday.

In many ways, this was the perfect match for the Portugal captain to make his return, against an Osasuna side struggling to adjust to La Liga after winning promotion via last season’s play-offs.

Having scored early, Ronaldo also played a part in the second goal; his lob towards Alvaro Morata was pushed out by keeper Nauzet, running loose for Danilo to drill the ball through the crowd and into the net.

In between those two moments, there was a classy backheeled flick to set Mateo Kovacic away down the left for a break that came to nothing, and an attempted volleyed lob that landed on the roof of Nauzet’s net.

Real’s 15th successive La Liga victory – a run stretching back to the start of March – was wrapped up in little more than an hour as they went top of the table, at least until Barcelona’s match was completed later on Saturday. Las Palmas, the morning leaders, lost 2-1 at Sevilla.

Ronaldo, still not back to full fitness, was replaced after 66 minutes to a standing ovation. Real boss Zinedine Zidane will hope to see the forward’s season pick up speed.

Zidane’s side, 5-0 up by the 62nd minute, rather took their foot off the pedal after that, although substitute Karim Benzema hit the bar and the post in the final moments.

Diego Simeone’s side had drawn their opening two matches against promoted clubs Alaves and Legranes, but were comfortable victors this time as Antoine Griezmann scored twice after Koke’s opener, with Angel Correa adding a late fourth.