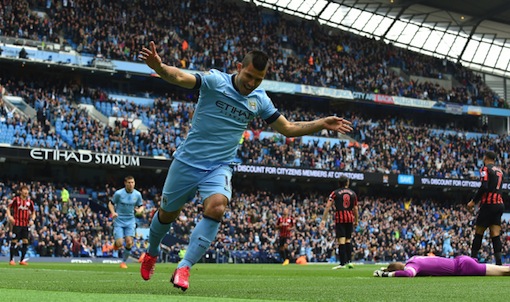 In Pep Guardiola’s first group game in charge, Aguero pounced to prod in an Aleksandar Kolarov cross and added a penalty when Ilkay Gundogan was fouled.

He rounded the keeper for his third in front of around 32,000 fans, a figure hit by Tuesday’s postponement.
Advertisement

Substitute Kelechi Iheanacho completed the scoring, firing in from 12 yards.

Monchengladbach, who saw nearly half their fans fly home before kick-off due to the rearrangement, offered little and it seemed a matter of time before Aguero added another treble to the one he hit against Steaua Bucharest in qualifying.

Monchengladbach keeper Yann Sommer also produced two close-range saves to deny Aguero, as Pep Guardiola’s side fired 22 attempts at goal against a side that finished fourth in last season’s Bundesliga.

City’s Champions League record features two exits at the group stage, twice going out in the last-16 and a club-best semi-final place over five seasons.

Guardiola’s remit will be to take them further and his record of reaching at least the semi-finals in his seven Champions League campaigns – including two triumphs with Barcelona – offers hope for the club’s following.

Against Monchengladbach, his side were far from the pass-heavy machine he built in Catalonia – instead they were efficient, seeing less of the ball than their visitors in the first-half but using it slickly to carve out chances.