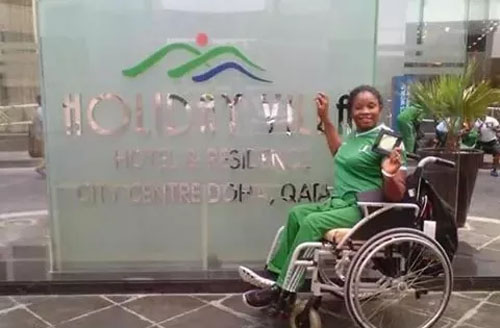 Flora Ugwunwa set a new world record in the women’s javelin – F54 event on Tuesday at the Rio Paralympics to give Nigeria its seventh gold medal.

She recorded a throw of 20.25 metres after six attempts to win the gold medal and take Nigeria’s tally to seven gold, two silver and one bronze medals.

On a day when Nigeria’s medals’ search was looking to be futile after some failure in the favourite hunting ground of power-lifting, the athletics event provided succour.

NAN reports that Ugwunwa beat a field of nine to set new Paralympic and world records, while Tunisia’s Hania Aidi won the silver medal with a throw of 18.88m.

South Africa’s Ntombizanele Situ completed the African sweep of the event’s medals by winning the bronze medal with a heave of 17.90m.

Earlier in the day, Nigeria had been so close but still far from winning any medal on the day after some unsuccessful outings.

The Games will come to an end on Sunday.