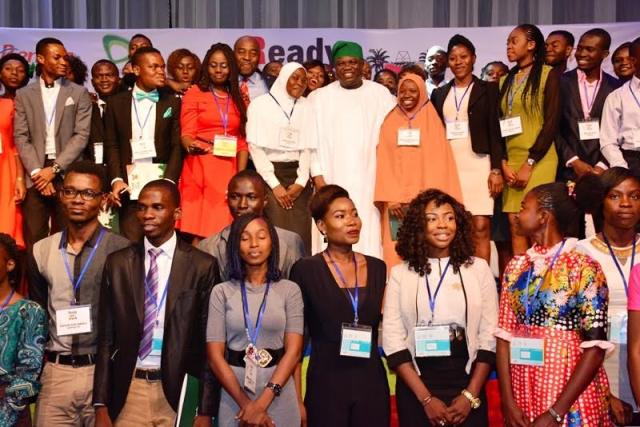 The students-Sarunmi Oluwafemi and Dada Samuel, were among the 422 successful graduates of the Ready, Set, Work (RSW) programme of the State Government targeted to equip graduates of tertiary institutions in the State with necessary entrepreneurial skills and to make them emerge as ready products for the increasingly competitive labour market, as well as job creators.

Oluwafemi and Samuel, who emerged as first place winners of the pitch competition of the programme, were equally given N1million seed funding and placed on N100,000 monthly working capital for six months, all geared towards encouraging their business idea to grow.

The business idea, which is Biogas production, involves the treatment of animal waste in order to generate Biogas which can be used for domestic cooking, generation of electricity and other purposes. The technology is targeted at providing a potential substitute for the ever costly liquefied petroleum gas.

Speaking at the graduation ceremony, Governor Ambode said his administration remained strongly committed to capacity building, entrepreneurship empowerment, and sustainable youth development, adding that the RSW initiative was one of the initiatives targeted at youth empowerment.

While stating that the future of Lagos and indeed the country lies in the hands of the youth who constitute a significant portion of the population, Governor Ambode said his objective is to allow students of tertiary institutions in the State have access to initiatives such as the RSW and other programmes.

The Governor, who invited public and private sector such as non-governmental organizations, international agencies, and well-meaning Lagosians, to partner with the State Government in raising students and youths who will transform the State, the country and indeed, the world, also vowed to increase the number of students in the pilot scheme of the RSW programme from 500 in 2016 to 1000 in 2017.

Besides, Governor Ambode congratulated the 422 successful graduates of the scheme, recalling that the RSW, which lasted for 13 weeks, had been a journey requiring passion, diligence, discipline and perseverance.

The Governor also advised the students to remain committed to the ideals that brought them so far, especially in the face of ongoing economic challenges.

He said: “This is a time to push ahead with the same strength and focus that brought you to this point, and to pursue with vigour the knowledge, skills, and ideas formed in you over the last three months.

“The private sector would benefit from your passion and professionalism, while the entrepreneurial world awaits your vision driven ideas. As you progress in your journey, strong discipline remains an imperative and as pilots and ambassadors of “Ready, Set, Work”, you must uphold the positive values of decorum, respect, and self-management. Stand out and stand apart from the crowd in the “outside world,” he said.

The Governor, who announced employment opportunities with the State Government for some of the graduates, also appreciated the private firms who partnered with the government to ensure the success of the 2016 programme.

Earlier, Special Adviser to Governor Ambode on Education, Obafela Bank-Olemoh, in his welcome address, said the RSW scheme, which witnessed 13 weeks of intensive training in partnership with corporate Nigeria, was in response to the need to churn out graduates who will be equipped with the needed entrepreneurship skills to contribute meaningfully to nation building.