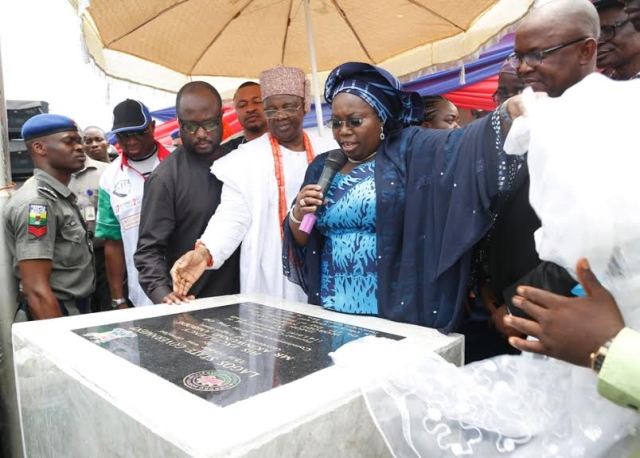 Lagos State Governor, Mr. Akinwunmi Ambode on Saturday flagged off a week-long commissioning of 114 roads newly constructed in all the 57 Local Government Areas and Local Council Development Areas (LCDAs) in the State, with a pledge to commence the construction of second round of another 114 roads across the State soon.

The roads were built at a cost of N19.4 billion. The newly constructed 114 roads which were designed with walkways, medians, street lights and standard drainage systems, were selected two per each of the 57 LGs and LCDAs in the State.

The construction of the inner roads, which is an initiative of the Ambode administration and in fulfillment of his campaign promise, was geared towards massive intervention on access and link roads, boost security and increase the socio-economic well-being of residents of the State.

Speaking at the formal flag off of the commissioning ceremony in Ikorodu North LCDA, Ambode said the remarkable feat was not only an eloquent confirmation of a promise kept, but a testimony of the popular saying that nothing can stop a people who have resolved to move forward.

The governor, who was represented by his deputy, Dr, Mrs Idiat Oluranti Adebule, recalled the contract of hope which he signed with the people during the electioneering and his inaugural speech, adding that the completion of the 114 roads was a glorious dawn of community development accelerated through inclusive governance and a historic leap of faith for his administration and the citizens.

“This means that the road network in our State of Excellence has increased by 56.1 Kilometers. It means that we have added 112 Kilometres of walkways and covered drains. And it means additional 56.1 kilometres of our roads are being lit by independent powered street lights to improve the security of our neighborhoods, the visibility of pedestrians, commuters and motorists as well as creation of a night economy.

“At a time the national economy is facing financial challenges, our administration is able to inject over N19 billion into the economy of our State, stimulating employment and engaging the business sector.

“No fewer than 89 local companies executed the road project with thorough supervision by the communities and government. About 5,700 direct jobs were created for professionals, artisans and laborers in the construction industry. A larger number of people, approximately 10,000 suppliers and dependants felt the positive impact of this stimulus package in their lives,” Ambode said.

Giving an insight as to how the roads were selected, the governor said in line with the principle of civic engagement of his administration, Community Development Associations (CDAs) were encouraged to suggest the roads requiring construction according to their needs, adding that the CDAs were also motivated to participate in the monitoring of the projects with the view to taking ownership on completion.

He said Jimoh Street in Ikorodu North LCDA which was the first to be commissioned, was one of the community-driven projects, adding that the road was picked as the first to be commissioned in appreciation of the diligence of the contractor, DC Engineering for being the first to complete the project within the stipulated six months. He said the road, no doubt, would go a long way in improving the State and make it a preferred investment destination worldwide.

Besides, Ambode said the 114 roads would be an annual rite to make Lagos a true megacity, adding that the process for the second round of the 114 road projects had already begun, and urged the residents to be part of it and guard the infrastructures being provided by government jealousy.