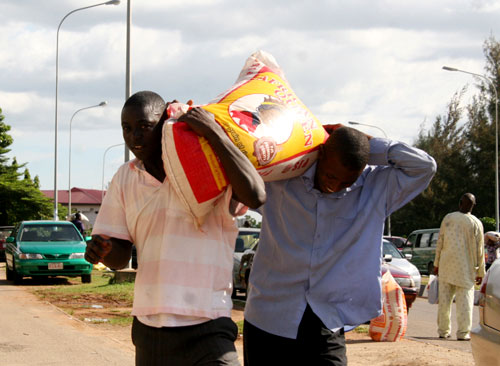 A Jos Chief Magistrate’s Court on Wednesday sentenced two labourers, Friday Duro, 21, and Friday Audu, 22, to 14 months in prison for stealing a bag of rice.

The duo, who reside at Jenta Adamu Street in Jos are facing a two-count charge of criminal trespass and theft.

The Magistrate, Mr Jovita Binjin, sentenced them after they pleaded guilty to the crime and pleaded for leniency.

In their plea they said that hunger led them to the crime.

“It was hunger that led us to do it, we have stayed without food for days and we needed money to buy food.

“Have mercy on us we will not do it again,’’ they pleaded.

The magistrate in his ruling said that the accused were sentenced to four months in prison for trespass.

He said that the sentence was meant to serve as a deterrent to those who might want to engage in similar acts.

Earlier, the Prosecutor, Sergeant Thomas Amuku, told the court that one Agbat Luke, a security man attached to the Satellite Market, Jos, arrested the accused and handed them over to the police on Sept. 20.

Amuku said “the accused persons trespassed into the market and broke into a shop to steal but were apprehended’’.

He said that during police investigation, the accused confessed to stealing a bag of rice belonging to one Asabe Amos.

The prosecutor said that the accused admitted selling the bag of rice to one Mrs Asabe Alechenu for N 3, 000.

He said that the accused went back to steal another bag of rice but luck ran out on them and they were apprehended.

Amuku said that the offence contravened the provisions of Sections 348 and 287 of the Penal Code.