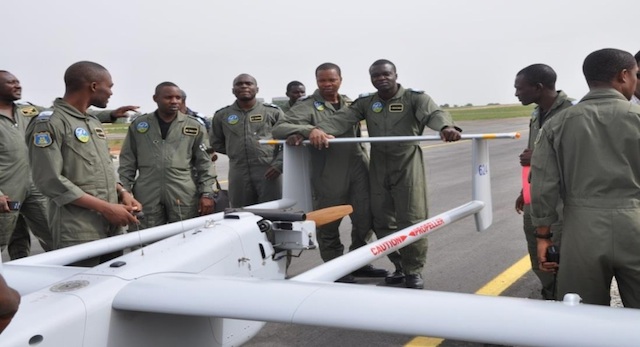 Nigeria's Air Force personnel pose next to a Aerostar drone

To ensure fair, free and credible governorship election on September 28 in Edo State, the Nigerian Army said it would deploy drones to monitor strategic location during the conduct of the election.

The Commander of 4 Brigade, Nigerian Army, Brigadier-General Raji Benbela, who spoke to journalists in Benin during operation show of force staged by a combined team of security agencies in the state, said the deployment of the drones will support the aerial view of strategic locations across the state and also help to check activities of hoodlums.

He said the show of force was not to intimidate the people but to assure them to come out en masse and vote on Election Day, adding that security agents would be deployed to strategic locations to stop unwanted elements from disrupting the process.

Benbela disclosed that the Army had arrested some persons and that they would be made to face trial after the election. He appealed to the electorate and political gladiators to conduct themselves in such a manner that would not jeopardize the process.