Clinton leads Trump by 4 points ahead of first presidential debate 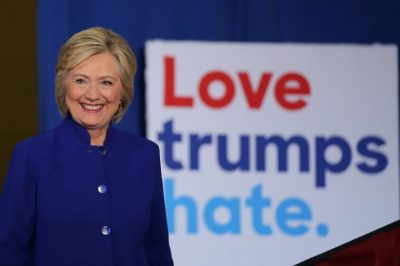 Democrat Hillary Clinton had a four-percentage point advantage in support over Republican Donald Trump ahead of their first U.S. presidential debate, according to the latest Reuters/Ipsos national tracking poll released on Friday.

The Sept. 16-22 opinion poll showed that 41 percent of likely voters supported Clinton, while 37 percent supported Trump. Clinton has mostly led Trump in the poll during the 2016 campaign, though her advantage has narrowed since the end of the Democratic and Republican national conventions in July.

With just six weeks before the Nov. 8 election, Monday’s debate at Hofstra University in Hempstead, New York will be the first of three between the White House rivals. It presents a major opportunity for them to appeal to voters who have yet to commit to a candidate after a mostly negative race in which Clinton and Trump have sought to brand each other as untrustworthy and dangerous for the country.

The live, televised matchup is expected to draw a Super Bowl-sized television audience of 100 million Americans, according to some commentators.

Among those watching will be people who so far remain on the fence. This could be a sizable group: Some 22 percent of likely voters said in the latest poll that they do not support either major-party candidate. That was more than twice the proportion of uncommitted voters at the same point in the 2012 election between Democratic President Barack Obama and Republican Mitt Romney.

These uncommitted voters appear to be leaning more toward Trump than Clinton, according to the latest poll, though they have not been convinced enough to say they will vote for him in November. It was also possible that some of these voters would pick an alternative-party candidate like Libertarian Gary Johnson or the Green Party’s Jill Stein.

The Reuters/Ipsos poll is conducted online in English in the continental United States, Alaska and Hawaii. It included 1,559 respondents who were considered to be likely voters given their voting history, registration status and stated intention to show up on Election Day. It has a credibility interval, a measure of accuracy, of 3 percentage points, meaning results could vary by that much either way.

National polls have produced varying measurements of support for Clinton and Trump during the 2016 campaign. The differences are partly due to the fact that some polls, like Reuters/Ipsos, try to include only likely voters, while others include all registered voters. The Reuters/Ipsos tracking poll gathers responses every day and reports results twice a week, so it often detects trends in sentiment before most other polls.

Polling aggregators, which calculate averages of major polls, have shown that Clinton’s lead over Trump has been shrinking this month. The most recent individual polls put her advantage at 3 percentage points.