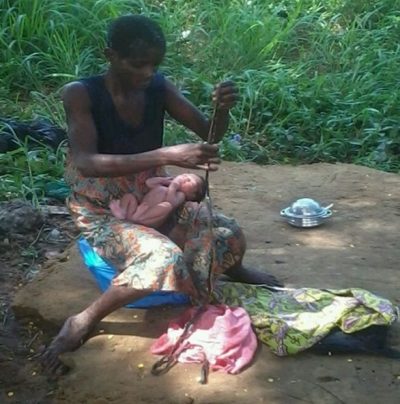 Mad woman with a baby

Sympathisers on Sunday rescued a baby of about nine months old from his suspected mad mother as she beat him repeatedly on request for food.

The incident occurred on a roadside in Ugwuachara, an outskirts of Abakaliki.

The suspected lunatic had eaten all the food given to her by individuals without giving the baby boy.

“The wailing of the child further attracted the sympathy of Reverend Sister Cecilia Chukwu, Executive Director of Succour and Development Initiative, Abakaliki.

“She directed her assistant to give the child warm bath, food, clothing and other immediate needs,” he said.

Nwali while receiving the baby, had inquired of the mental status of the woman to avoid insinuations of kidnapping or child trafficking.

“The people who brought the child to this place should bring the woman to be examined medically and offered medical treatment,” Nwali said.

Nwali later followed the sympathizers to the scene and met the woman sleeping.

He then directed a psychiatric nurse to wake and give her food and water.

After eating, the suspected lunatic was taken to a hospital where she is currently undergoing medical treatment.

Later, the child was returned to her for breastfeeding under the watchful eyes of the hospital’s authorities.