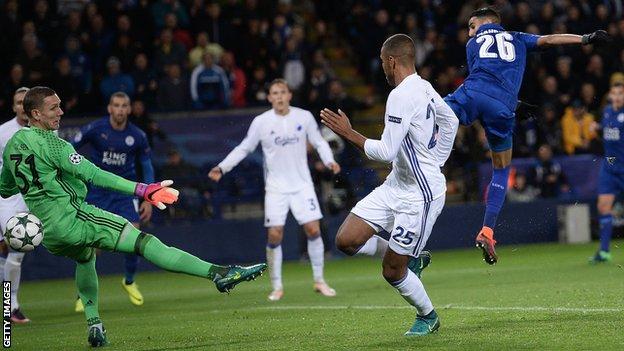 Leicester City scored the only goal of the match

Leicester City stand one victory away from qualification for the Champions League knockout phase after beating Copenhagen at the King Power Stadium to make it three wins from three in their group.

Leicester’s win was not without its anxious moments, with former Cardiff City striker Andreas Cornelius heading inches wide moments after the Foxes had taken the lead.

And it took a brilliant one-handed save from goalkeeper Kasper Schmeichel in the closing minutes to thwart Cornelius again and maintain Leicester’s unblemished defensive record in this season’s Champions League.

Leicester can now secure a place in the last 16 with a win in Denmark on 2 November, having already guaranteed at least a Europa League spot.

When Leicester’s thoughts turned to their first Champions League campaign, qualification from Group G would have been regarded as a major success for manager Claudio Ranieri and his players.

But the Foxes may just fancy their chances of taking the dream journey a step further after becoming only the fifth competition debutants in Champions League history, after AC Milan, Paris St-Germain, Juventus and Malaga, to win their opening three games.

Topping the group would make life a lot easier in the last-16 draw as it vastly increases the chances of drawing beatable opponents when all logic – something, admittedly, they defied last season – suggests they would struggle against Europe’s elite.

The King Power Stadium is a compact and atmospheric arena, swirling with noise, that is perfectly designed for European nights and making even the most illustrious sides uncomfortable.

If Leicester can keep up this form, and the likes of Mahrez, Jamie Vardy and Slimani can provide the threat to supplement the defensive resilience that won the Premier League and has seen them become only the third team to start a Champions League campaign with three clean sheets, then there may be plenty of sides they can trouble.