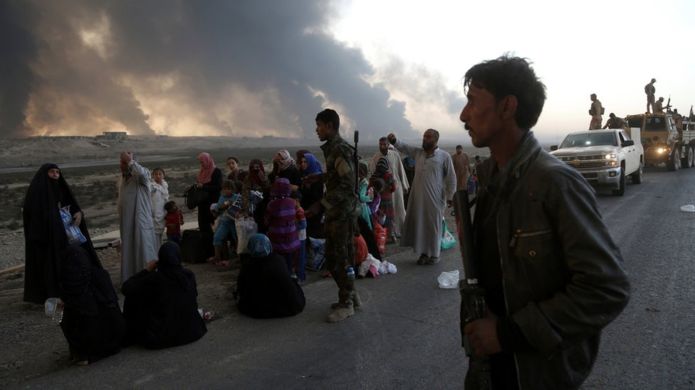 Thousands of people have fled the Mosul area and more are expected as Iraqi troops move on the city to liberate it from the so-called Islamic State (IS).

Some 5,000 people have crossed the border into Syria in the last 10 days, about 900 of them since the military began in areas around Mosul on Monday.

They have arrived at the al-Hol refugee camp where conditions, aid workers say, are already filthy and overcrowded.

The UN is preparing for what it fears could be the biggest man-made humanitarian crisis in recent times.

Refugee camps are being built in the south, east and north of Mosul in preparation for a flood of people fleeing the city. The UN says it expects at least 200,000 in the coming days and weeks.

Mosul residents had been told by the Iraqi government that it might be safer to stay in the city while the operation is under way – with fears IS fighters have booby-trapped roads and placed snipers on routes in and out.

But there are also fears that IS militants could use residents as human shields by moving into their neighbourhoods, and concern that the group may even use chemical weapons.

Residents, reached by telephone by Reuters news agency, confirmed that IS was trying to prevent people from fleeing the city and had directed some of them towards buildings likely to be targeted by air strikes.

US President Barack Obama said on Tuesday it was important to ensure that Mosul’s residents could safely flee the city.

“If we aren’t successful in helping ordinary people as they’re fleeing Isil [IS], then that makes us vulnerable to seeing Isil return,” he told reporters in Washington.

Many of those in and around Mosul who have already escaped have headed west to camps across the border in Syria, including al-Hol camp.

The charity Save the Children says 5,000 people have arrived in the last 10 days.

The UN says the camp received 912 people in the last 24 hours and is expecting a further 3,000 people who were dropped off by smugglers and are being cleared by security.

The camp is being expanded to eventually take in 50,000 people, but Save the Children says the camp currently has just 16 latrines, is littered with waste and faeces, and has no clean water.

“These families arrive with nothing but the clothes on their backs and find almost nothing to help them,” said the charity’s Tarik Kadir. “The camp is bursting at the seams and risks being overwhelmed.”

Iraqi troops are moving towards Mosul from the south, while their Kurdish allies have been approaching from the east.

But progress is expected to be slow, and a Kurdish commander Sirwan Barzani told CNN that it could be two weeks before Iraqi troops enter Mosul and two months before the city is liberated.

IS fighters appear to be putting up stiff resistance in places, with the group releasing video purporting to show them firing on coalition armoured vehicles.

Mosul is the oil-rich capital of Nineveh province and Iraq’s second-largest city.

It was overrun by IS in June 2014 and was the place from where IS leader Abu Bakr al-Baghdadi proclaimed a “caliphate” in parts of Iraq and neighbouring Syria.