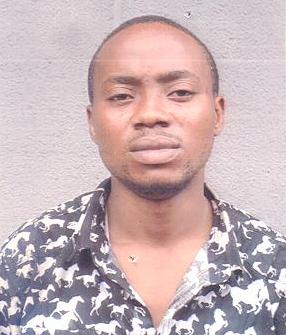 The police at the Lion Building Division, Lagos Island have arrested a suspected kidnapper, Abiodun Joshua, 28 for attempting to withdraw N44m ransom he demanded from a victim, Mrs. Oseni Aigbogun Omolewa, in Kano State.

The Police alleged that trouble started for the suspect in October, 2016 in Lagos when he sent a threat message to the complainant in Lagos to pay N44m into his Kano State First Bank account, warning that failure to do so will result in him eliminating her and her children.

Following the threat message, the complainant, fearing for her life, reported the threat to the DPO in charge of Lion Building Division, CSP Folashade Tanaruno.

The DPO, according to investigation, advised the complainant to play along with the suspect and pay a bait sum into his account. The DPO notified the bank management of the development.

Nemesis caught up with the suspect when he went to the bank to withdraw the ransom as he was apprehended by bank officials and handed over to the police in Kano State.

The bank management notified the DPO of the arrest of the suspect and a team led by Inspector Elegbede Oluranti travelled to Kano to bring the suspect to Lagos.

During interrogation, the suspect allegedly confessed to the crime, saying that he picked the phone number of the complainant from the receipt she issued him when he bought hair weave-on from her in Lagos.

“I did not intend to harm the complainant but to get some money from her to boost my business. I am a trader in Kano state and I usually purchase hair weave-on from the complainant in Lagos. I picked the phone number with which I sent the threat message from the receipt she issued me when I went to Lagos to buy weave-on
from her shop. I regret my action,” the suspect allegedly told the police.

The suspect who is from Ilesha, Osun State, was arraigned before an Igbosere Magistrates’ Court on a five-count charge of sending threat to life messages, extortion and kidnapping.

Police prosecutor, Inspector Abbas Abayomi said the offences committed are punishable under sections 409, 299, 300 and 404(2)1 of the criminal laws of Lagos State, 2011.

The accused pleaded not guilty to the charge and Chief Magistrate A. O. Komolafe admitted him on bail in the sum of N2m with two sureties in like sum.

Komolafe adjourned the case till 22 November, 2016 for mention while the defendant was taken to the Ikoyi Prison, Lagos, pending when he will fulfil his bail conditions.