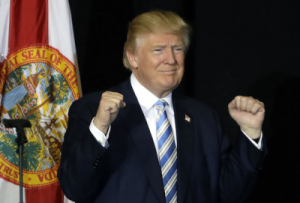 The US media claims it did not see Trump’s victory coming. It did; it just turned its evil and uber-partisan eyes away from a nagging probability that was unfolding before its very eyes. Instead of confronting, or better still, reporting that reality it turned to manipulating obvious and not-so-obvious facts, while allowing itself to be blinded by its not-too-subtle political and ideological preferences.

The subject of the media is one that is obviously very close to my heart. I worked as a full-time journalist in Nigeria for close to a decade from the late 80s to 1998, rising to serve as an Editor with the Thisday group of newspapers and Member of the Editorial Board of the now-defunct Concord Newspapers, owned by the late Bashorun MKO Abiola. I also first came to the US at the end of the 90s on a Journalism Fellowship that took me and others on that Fellowship to many states and cities in the US, including offices of such well-known flagships of the US media like the Washington Post, the New York Times, CNN and the Chicago Tribune, to mention a few.

Even though I later trained and now work as an attorney in the US, I have not kept my eyes—nor attention—away from a profession in which I was trained and still hold very dear. But the truth still needs to be told: the state (or, maybe, reality) of the media in the United States of America leaves me sad. Very sad.

Instead of the vessel of information and knowledge that it projects itself to be—and with its access to superior technology definitely unquestioned—the US media is in reality a tool of evil, partisan hacks who control the profession like a ventriloquist and also populate it, while largely using its resources and dignity to manipulate enraptured publics unable to escape their strong and omnipresent reach.

One worrisome characteristic of the media in the US, once-acclaimed to be the freest and most independent in the world, is the manner of its ownership, which are usually behemoth corporations. CNN, a mainstay of cable television news all over the world (including Nigeria), has been variously owned by corporate giants such as AOL and Time Warner. The Washington Post is now controlled by the man who owns the online retail giant, Amazon. NBC and MSNBC are controlled in one form or the other by the Microsoft Corporation and the cable giant, Comcast. What this means is that journalists at these outlets often feel the pressure to be anything but independent. While they need the behemoth owners to stay afloat in an increasingly competitive and challenging media market, they often choose to sell their souls to the interests of the corporate interests that control them.

I have also observed in the many years I have lived and worked here in the US that the controlling impulses in a vast swath of the American media tend to be liberal and “progressive”. In contrast, the Fox News, the Drudge Report and the Rush Limbaughs (radio and TV) of the world who tend conservative and often lean right have much less reach and influence, compared to the liberal tendency of the American media.

This was the (probably simplistic, I admit, but more on that later, in another fora) backdrop that led to the recent “debacle” of a Trump victory that “no one” ostensibly saw coming, especially the resource-rich American media.

Not quite. The vast—and liberal segment—of the American media failed its vast publics (compared to the conservatives’ share of the media market) simply because it chose to ignore the Trump phenomenon, rather than professionally investigate / research and then educate its readers about it.

It was professional malpractice at its most embarrassing level.

This much-vaunted media which unabashedly celebrates itself—and is also celebrated by those inside and outside the US who hardly know better, since they are also manipulated—ultimately fell victim to its own manipulative practices, and the embarrassingly partisan slants it gives to stories, largely informed by personal, pecuniary and societal impulses that have nothing to do with journalism and its timeless tenets.

Any unbiased observer or watcher of CNN, MSNBC and other liberal outlets in the months before the elections, or read the New York Times, the Washington Post, etc., prior to the November 8 polls in the US, witnessed these outlets engage in unceasing hack jobs against the Republican candidate. Nearly every story about Donald Trump became a contrived scandal: his taxes; modeling pictures his wife took before they married; the “ethnic” meals he ate while travelling on his private plane; comments from a Gold Star parent about the Republican candidate; etc.

It did not help that Trump was also an “orphan” of sorts during the campaign process; elite members of his own party who could afford to make a lot of noise in the now-disgraced “mainstream media” abandoned him and piled on during every “scandal” launched or sustained by the vast, liberal media.

I am no conservative nor a member of the US Republican Party. But given my background in the media and my eternal fealty to unbiased reporting and journalism, the entire spectacle that passed for media coverage of the recent US presidential election was simply unbearable to watch. “Shameful” does not even begin to describe it.

Many times, one could almost feel the glee on the faces of certain panelists who appeared on the various CNN news programmes, as they took turns piling on Trump in the guise of “informed” news commentary and analyses. Certain CNN anchors would mention Trump’s name during their segment and then laugh mid-sentence, for no apparent reason, while shaking their heads!

Unknown to such “journalists” and “analysts’, however, many of us watching or listening to them were not waiting on those “professionals” to interpret Trump or give us a feel for his impulses, many of which I believe are noble, despite the stridency of the candidate’s “I’m-always-a-winner-and-will-say-or-do-anything-to-get-elected” rhetoric.

Although I have never met the man, I have read about Donald Trump since the late 70s, well before I even became a teenager. I read the National Enquirer religiously every week back then while growing up in Nigeria, along with other (more staid) American magazines like TIME and Newsweek, among others. I read about his wild bachelorship ways back then that would make even the most “hardcore”, free-wheeling liberal blush, in New York City, no less; I read about his courtship and then eventual marriage to his first wife, Ivana Trump, who hailed from the-then Czechoslavakia, a country behind the now-defunct “Iron Curtain”. I savoured the stories about Trump’s many alleged affairs, and then the one that destroyed his marriage to Ivana, with Marla Maples, who then became his second (and also ex-) wife. In between, I read stories of his many bankruptcies, and how he emerged from these failures that would have destroyed many other persons, even more successful.

And so on and so forth. It was as if I grew up with the man in my life—even though I lived thousands of miles from him, in Nigeria.

Then, fast forward to 2015, when Donald Trump announced his candidacy for US president. Of course, things had become a little different. I now lived and worked in the US, and Trump had declared himself a right-leaning Republican and candidate for the US Presidency through the Republican Party (after having been a liberal democrat nearly all his life, with views and actions over the years that adhered to the most liberal of ideologies).

Then, to my horror, I watched the vast, liberal US media first build up the guy during the Republican primaries, then proceed to define him as an uber-racist, right-wing Republican “they had always known him to be”, prior to tearing him down in order to benefit Hillary Clinton (for the records, even though I was eventually not able to vote, I wanted Hillary Clinton to win!)

One particular online news outlet, the Huffington Post, comically stood out in its mindless partisanship. From the moment Trump launched his campaign, up to the day of the elections, the site insisted on publishing any stories about Trump only on its entertainment pages, along with the following rider: “Note to our readers: Donald Trump is a serial liar, rampant xenophobe, racist, misogynist, birther and bully who has repeatedly pledged to ban all Muslims —1.6 billion members of an entire religion—from entering the US”.

Even when there were whispered—then widespread—stories that the polls which gave Hillary a great edge were wrong and that the election was very close, this overwhelming segment of the US media still refused to do its job; instead, it dug further into its redoubts of mindless partisanship. CNN panelist after CNN panelist (not to mention MSNBC), Washington Post story /commentary after AP story/commentary derided ever-growing speculations about the “hidden Trump voter” who would not tell any pollster he/she would be voting for Trump until he cast his/her vote.

Yet, despite Hillary’s vaunted “ground game” that was supposed to overwhelm Trump’s and the fact that the Hillary campaign vastly outspent Trump’s, the Republican contender always remained close to Hillary Clinton in the polls, in spite of his many crises, many gleefully championed by the liberal media (especially the NBC audiotape, of the “grab them by the p—y” fame).

Despite every indication to the contrary or every lead, members of this same lazy, evil, uber-liberal and majority wing of the US media stuck to their guns of telling their viewers and readers that Donald Trump was on his way to a loss, or that he had a near-impossible path to the US Presidency. These so-called journalists who are really partisan hacks with primal, evil agendas (more on that later, in other fora), became so blinded by their partisanship that they forgot a fundamental tenet of an otherwise noble profession: chase down every lead, wherever it may lead.

It was great seeing these so-called journalists on election night as the prospect of a Trump victory they thought they had manipulated away in their evil studios, newsrooms and radio booths stared them squarely in their faces. I especially laughed heartily every time the camera panned to Jake Tapper’s crest-fallen face on CNN, when he routinely had to comment on the results that showed Trump was on his way to securing an “upset” victory.

More significantly, the “hidden vote” that was laughed at and dismissed by the once respected but now thoroughly corrupt and evil liberal segment of the US media was “hidden” no more!

The real story of Trump’s victory is not his triumph against an opponent considered unbeatable until she got trounced; it is how the phenomenon “no one saw” exposed the majority of the US media for what it really is: an aggregation of “pretend-journalists”, or media practitioners (they also populate the radio and advertising segments of the US media, wreaking mayhem and spreading evil), who routinely engage in shameless, orgiastic paroxysms of bare-faced partisanship, while all the while hoping no one would notice. Or comment.

Now we do. And we largely have President-elect Donald Trump to thank for that.

Soboyede is a US-trained journalist and lawyer.