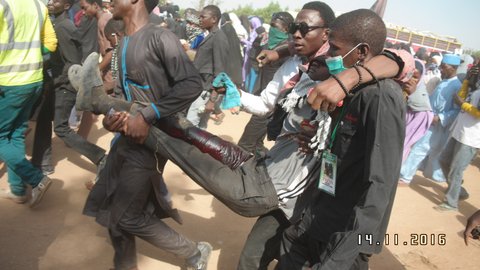 An injured member of IMN being carried by his colleagues

Contrary to police statement that only nine persons died in the clash between members of the Islamic Movement of Nigeria (IMN) and policemen in Kano on Monday, the movement popularly called the Shiites said close to 100 members were killed.

In a statement issued by Ibrahim Musa, President Media Forum of IMN, the movement stated: ”Well armed police men in close to a hundred police trucks today opened fire on the peaceful Arbaeen trek to Zaria in the outskirts of Kano metropolis, killing close to a hundred members of the Islamic movement (IMN) including women and children.

”Exact number of those killed or maimed by police bullets is still being ascertained since most of the corpses were again ferried away by the police (possibly for mass burial).

”The trek had started like in previous years solemnly, orderly and peacefully without hitches. Shortly after, a contingent of armed policemen appeared and started firing teargas on the trekkers without provocations. Because of the massive turnout, the trek continued and when IMN members reached a neighborhood called Kwanar Dawaki, about five Kilometers from Kano, police opened fire on the trekkers with live ammunition. The firing by the police was randomly carried out that they also hit their colleague, and we are not unmindful of possibility they would claim we did it, similar to what they did in Zaria.

”Their antecedent and evil schemes are glaring. Already they have engaged the services of unscrupulous paid agents to push down the throats of the public that it was “clash” or even “exchange of fire” through falsified news reports. What vindicates us however is the very peaceful conduct of previous and present treks. The World bears witness to our peaceful conduct in the face of persecution. No one can simply attribute violence to us overnight.

”We learnt of the attack as it was being plotted and we exposed it much earlier. That the security forces brazenly executed it in broad daylight only further exposes who actually are the assailants.

”IMN is left bewildered as to why it is now criminal for some people to choose to trek to a certain town of their wish on foot, while not impeding the smooth flow of traffic along the highway. We view the unwarranted killings by the police as continuation of the army pogrom started in Zaria last year.

”We hereby call on the Governor of Kano state not to turn the recently peaceful atmosphere enjoyed in the state into one where innocent lives are being shed on the slightest excuse. We also call on the police authorities to hand over to us our dead. They must not be buried in a mass grave like was done by their counterpart in Kaduna state, because it is a crime against humanity.

”We will conclude by reiterating our 11 month old demand of freeing our illegally detained leader, Sheikh Ibraheem Zakzaky and all those in captivity with him.