My characters determine the course of my stories-Omotoso - P.M. News

My characters determine the course of my stories-Omotoso 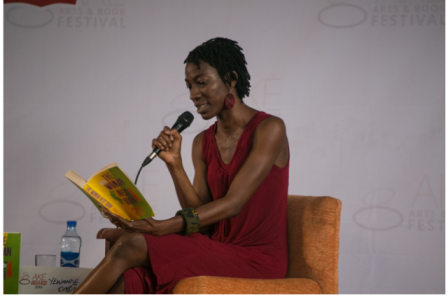 Omotoso, reading a passage from The Woman Next Door. Photograph: Ake Arts and Book Festival.

Yewande Omotoso is an architect and novelist resident in Cape Town. Her widely-acclaimed debut novel, ‘Bom Boy’, won the 2012 South African Literary Award for a first time published author and was shortlisted for the Sunday Times Fiction Prize as well as the Etisalat Prize for Literature. Adefoyeke Ajao met with her at the recently-concluded Ake Arts and Book Festival, she discussed her new novel, ‘The Woman Next Door.’

Your new novel, ‘The Woman Next Door’ explores the theme of racism, why did you choose to write about that?

I didn’t so much as choose to write about that. More like I always enter story through character and as I started working on these two characters, Hortensia and Marion, some of the themes (there are several) that came up were the themes of prejudice, racism and class, how these intersect and how they are woven through the two lives their antagonistic relationship.

You’ve done this through octogenarian characters, what influenced the development of these sassy women?

Again the characters that “presented themselves” were always women in the later years of life. I think this might have been influenced by spending time with my grandmother who was in her early eighties at the time I started writing the book. I found myself meditating and captivated by the idea of being old, of having lived a long life, possibly with some regret and a few things unresolved…and not much time life to redeem all that.

Your work is an insightful take on the racial polarity in South Africa, is the rainbow nation really an illusion and will South Africans be open to the scenario presented through your characters?

I never attempt to summarise anything, or to capture the totality of any experience or circumstance. Instead I present two characters and make the story true not for the entirety of South Africa – a complex nation with a lot more complication than just a binary system of power, and not a place I can ever assume to speak for – but true for them, Hortensia and Marion. For them the rainbow nation is, if not flawed, perhaps over-ambitious. Perhaps too much of a brand and now, twenty years on, there is still the work to make such claim into substance. Their aggression and sadness is only one flavour though. The real illusion is always paid for by the poorest, the most disadvantaged.
As to how the book is received in South Africa mostly those who have read it and connected with me have been kind and positive. Although I started writing the book in 2013/14 much has happened over the last year or so calling out the gaps in the rainbow and so 2016 has been an interesting time for the book to be released.

What are you currently working on?

I am working on another novel and have been for the past two years or so. It’s the story of divorced parents that go in search of their adult daughter whom they have had no contact with for almost a year. Essentially it’s the story of a family atomised and addresses an array of themes: motherhood, love, art and death.

You’re currently at the Ake Festival, surrounded by books, which ones have made it into your shopping bag?

If only I were a millionaire I would currently be the owner of every book by all the invited guests. It has been an honour to attend the festival amidst such amazing and inspiring people.