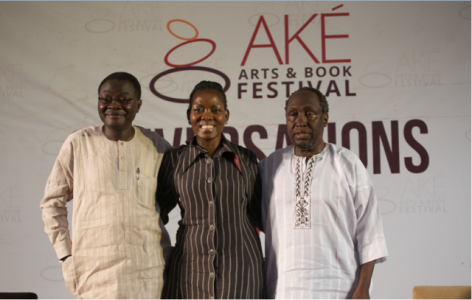 Legendary Kenya writer, Prof.Ngugi wa Thiong’o and the Executive Editor of The News Magazine, Kunle Ajibade have recounted their life experiences in prisons in their various countries at the recently-concluded Ake Arts and Book Festival in Lagos, Nigeria.

The use of language as a form of resistance also dominated Ngugi wa Thiong’o’s speeches at the festival.The celebrated Kenyan author’s appearance began with a discursive session on prison stories and literature of resistance. Moderated by writer and journalist, Molara Wood, the session also featured Ajibade, who discussed his detention under the late Gen. Sani Abacha, former Nigerian military head-of-state.

Prof. wa Thiong’o had initiated proceedings by acknowledging Mr Ajibade’s seniority in prison matters. Having spent one year in jail, compared to the latter’s three, he described himself as “simply an undergraduate” before reading an excerpt of his prison memoirs Detained: A Writer’s Prison Diary, published in This Prison Where I Live, the PEN anthology of prison writers. Recounting his incarceration at the Kamiti Maximum Security Prison, in Nairobi, where he was reduced from an illustrious Professor of English Literature to “a number in a file” by the Jomo Kenyatta administration, the reading revealed how he found solace in expressing his thoughts on toilet paper with “a language which did not have a modern novel.” 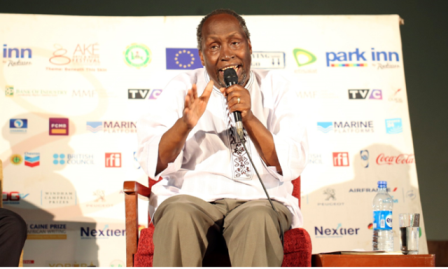 Photograph: AdedejiHamed /ElixirPrison was not a voluntary option for Ngugi, but he had chosen to make the most of the experience, thanks to a chance meeting with Wasonga Sijeyo, a fellow prisoner who encouraged him to keep his mind alert for those he had left behind. His dehumanisation at the hands of his jailers had created a connection with his native language, Gikuyu and made him an “African language writer”.

It was not long before Ngugi, famed for writing exclusively in Gikuyu, redirected the focus of the chat to the politics of language. In his opinion, being deprived of the opportunity to express oneself in a mother tongue is a form of mental subjugation and his resolve to write in Gikuyu was likewise a form of rebellion against what he considered the hegemonic influence of foreign cultures.

He decried the lack of historical works written by Kenyan authors, detailing the people’s struggles against foreign forces; commenting that when people are colonised, they are compelled to adopt the coloniser’s language to the detriment of their identity and the advantage of the foreign culture. At this point, he urged members of the audience to “campaign against the criminalisation of African languages”.

Before reading from his book: Jailed for life: A Reporter’s Prison Notes, Mr. Ajibade pointed out that the festival venue and some neighbouring monuments were memorials to the ill-fated June 12 elections, and its main protagonist, Chief MKO Abiola. The journalist and publisher mentioned that his imprisonment was due to circumstances that arose after the elections. His reading focused on the degrading conditions at the Makurdi Prisons, where he was held and how he managed to document his prison experience.

The well-attended session was interactive and both panellists answered questions about how the injustice of imprisonment affected their beliefs in God. Despite their consumption of the Bible and Koran – and their participation in the rituals associated with both religions while in prison – both men professed a spirituality that was not mediated by any established religion. Ngugi stressed the importance of both sacred books by saying they should be “allies to writers” because they were fine examples of literature of resistance featuring prophets who were sometimes sent into exile for denouncing misrule.

On the question of how their families fared during their times in prison, Ngugi responded by saying that, “the intended impact is not on the jailed, since he has been removed from the scene of his activism, but the minds of those outside the prison”. He elaborated by saying that the inmate’s first-hand experience of the prison conditions sometimes made it more bearable, compared to the distress of imagining the prisoner’s experience.

In his opinion, the aim of imprisonment was to quell the struggle by isolating the imprisoned from his allies; and if those outside the prison could be cowed, the inmate’s resolve can then be broken.

Mr. Ajibade agreed with this analysis, admitting that both the imprisoned and their supporters suffered “equally, but differently”. He cited a letter featured in his memoirs, where he had besought his wife not to become an object of pity as her jealously-guarded privacy was invaded by those who felt they were fighting his cause. The letter would eventually become a source of encouragement to Dapo Olorunyomi, Mr. Ajibade’s colleague whose wife and baby were imprisoned in his stead.

Despite the imperfections of the systems they fought to uphold, both panellists agreed that their detention was a worthy struggle since their stories outlived their jailers and taught them to be resilient. Their memoirs also afforded them the opportunity to connect with others experiencing struggles of varying forms. The session revealed the convergences and differences between the experiences of both men. Apart from being jailed by imperious rulers, both had fully digested the contents of the Bible and the Koran – the only literatures allowed in prison – during their captivity. They had somehow managed to keep prison diaries and were released shortly after their jailors’ deaths.

The similarities were not restricted to their prison cells as they also had children born to them during their incarceration: a son for Ajibade, and a daughter for Ngugi. Considering the harrowing conditions they were subjected to, they both seemed to have recovered fully from the trauma of incarceration.

Ngugi’s participation at the festival continued with the Life and Times Series, where he was interviewed by author and scholar, Okey Ndibe. The session kicked-off with Ngugi reading a paragraph from his short story The Upright Revolution: Or Why Humans Walk Upright, written in Gikuyu. His reading of what its publisher Jalada Africa touted as the “single most translated short story in the history of African writing”, was followed by readings in some of the 55 languages that the story has been translated into.

Nigerian writer, Kola Tubosun, who read a Yoruba translation of the extract, brought the number of translations to 56, continuing Jalada’s principle of getting people from different walks of life to translate selected stories into various languages.

Commenting on his involvement with Jalada and how he came about writing a story that transcended language barriers, Ngugi said that the writer’s collective had asked his son, Mukoma, to persuade him to contribute to the maiden Translation Issue. Since the family had a tradition of playing with words and challenging one another to come up with stories, he was immediately convinced. Ngugi, however, faced the challenge of creating a “perfect story,” and could not think of anything until he came up with the story in The Upright Revolution.

In getting the distinguished professor of English and Comparative Literature to talk about how he became a writer of fiction, Okey Ndibe drew a parallel with how he had bluffed his way to a fellowship with scholar and author, John Edgar Wideman, when in actual fact he had not even thought of a story.

Ngugi shared the story of an impulsive lie he had told to a senior colleague, Jonathan Kariara, about writing a short story that was still just a figment of his imagination and how that lie had forced him into actually writing.
When asked about revelations that the Makerere African Writers Conference which he participated in 1962 was funded by the CIA, Ngugi defended the organisers by saying he “didn’t think they were aware of the source of their funding”. The author also clarified his philosophical inclinations, by claiming to be an “Ngugist” rather than a disciple of the Marxist ideology that he had famously embraced. He still fancied the ideology though, because Marxist-inspired art offered a dialectic view of nature and society.

On the possibility of developing one African language, he wondered why energy should be invested in creating new languages when the existing ones were yet to be exhausted. In his opinion, “to develop one language, others might die”. According to him, the problem with language was the creation of hierarchies, where one language was considered superior to another and variations of existing languages such as Pidgin English developed as a form resistance to the proscription of native dialects by slave-masters. These “new languages” were born out of attempts to subjugate mother tongues and unless languages began to relate as networks, and remain in conversation with one another, some will always be alienated.

True to Ms. Shoneyin’s promise to “make a Nigerian out of him,” Dr. Soyinka adopted the Kenyan author as his “second father,” while Professor Osofisan christened him “Babarinde”. This was followed by a book-signing session of his newly-released memoirs, Birth of a Dream Weaver: A Writer’s Awakening.

Ngugi’s presence at the festival was a fitting reflection of the festival’s theme, “Beneath This Skin”. With his exposition on the historical use of language as a tool of subjugation, the acclaimed author canvassed the promotion of African languages by emphasising that they are as beautiful and relevant as the colonial languages. As he aptly stated, “our obsession with prizes diminishes us”. His arguments for the promotion of African languages and indigenous language literature posed a challenge to writers, whose quest for foreign laurels ensures that they pander to colonial whims, engendering a society that is gradually losing its identity to the hegemonic effects of globalisation and Western powers.