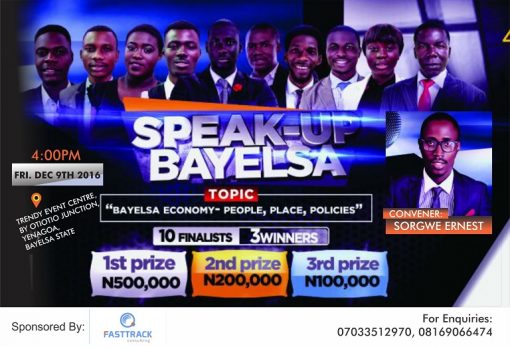 The contest which is aimed at engaging the minds of the Bayelsa State youths to think constructively and properly articulate their intellectual properties and ideas to the ultimate advancement of the state will produce orators who can represent themselves and the state.

This year’s edition of Speak Up Bayelsa is themed “Bayelsa Economy: People, Places and Policies”. The contest will hold by 4pm on 9 December at Trendy Event Centre (House 418) Bayelsa State.

According to the convener of ‘Speak Up Bayelsa’ Sorgwe Ernest – a lead Consultant at FastTrack Consulting, the contest seeks to help young minds to creatively express their thoughts in well-constructed speeches and dialogue rather than resort to violence and other vices.

Ernest who is also the chief facilitator of ‘Success at Your Reach’ and ‘Mind Clinic’, both motivational series hosted on Raypower and AIT Bayelsa respectively, said: “We have a unique message for Nigeria particularly at this time of recession and this is a message that will resonate globally.”

At this year’s “Speak Up Bayelsa”, over 103 contestants were screened but only the finest 10 were picked for the grand finale.

The solutions, suggestions and creative interventions of the contestants would be documented and handed to the Bayelsa State Government through a communiqué.