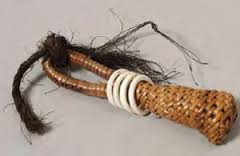 A 22-year-old unemployed man, Niyi Akande, who allegedly hit a police officer with a charm, was on Thursday docked at an Igbosere Magistrates’ Court in Lagos.

Akande, who is of no fixed address, is facing trial on a two-count charge of assault and possession of illegal substance.

The prosecutor, Cpl. Friday Mameh, told the court that Akande committed the offences on Dec. 5 at 7:00a.m., at Jakande Roundabout, Lekki in Eti-Osa LGA, Lagos.

He said that the accused unlawfully assaulted one Sgt. Matthew Omoche, who was performing his lawful duty.

Mameh said that the accused had a charm in his possession and used it to hit the police officer.

The accused, however, pleaded not guilty to the two-count charge preferred against him.

Consequently, the Magistrate, Mr N. A. Layeni, granted him bail in the sum of N50, 000 with one surety in like sum.

He said that the surety must be a blood relation of the accused and must have his address verified.

The magistrate adjourned the case till Dec. 19 for mention.