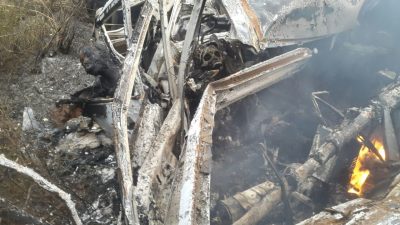 Vehicle involved in the accident

The Edo State Sector Command of the Federal Road Safety Commission (FRSC) has confirmed that 53 people died in the multiple accidents that occurred in the evening of Thursday at Abudu bridge, along Benin/Agbor Road, in Orhiomwon Local Government Area of Edo State.

Spokesman of the ‎State Sector Command, George Otoaviokhai, who gave the confirmation in a text message to journalists in Benin, said five persons also sustained varying degrees of injuries, making an estimated 58 persons involved in the accident.

In the text messages titled: “FRSC info on Abudu auto crash,” Otoaviokhai said eight vehicles, namely, two buses, one Sienna, one Dyna truck, one tanker, one Ford bus, one Toyota Corolla and one motorcycle, were involved in the accident he attributed to brake failure.

“All the in the two buses, Sienna and Corolla burnt to ashes and one dead person taken to mortuary.”

According to the FRSC Spokesman, all vehicles involved have been evacuated from the highway, while health officers from Orhiomwon Local Government Council were invited to give mass burial to the dead.