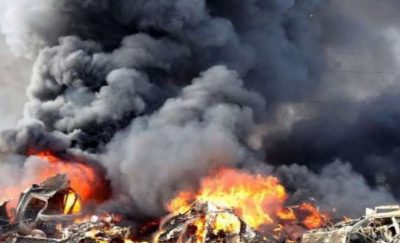 Scene of a blast

Muhammed, who confirmed the development in a telephone interview, said 57 of the injured were critical and 120 minor.

He said the critically injured were rushed to Mubi General Hospital and Yola Specialists Hospital, while those that sustained minor injuries were treated and discharged .

Muhammad called on federal government to deploy soldiers to the surrounding areas where he said Boko Haram insurgents set up camps.

He described the attack as set back, to relative peace enjoyed by residents who resumed normal commercial and social activities following successful military operations.

The explosions occurred at a market in Madagali town in northern part of Adamawa State, the military has confirmed.

The spokesperson of 28 Task Force Battalion in Mubi, Major Badare Akintoye said 30 civilians died in the attack while those injured were receiving medical attention in hospitals in Mubi and nearby Gulak.