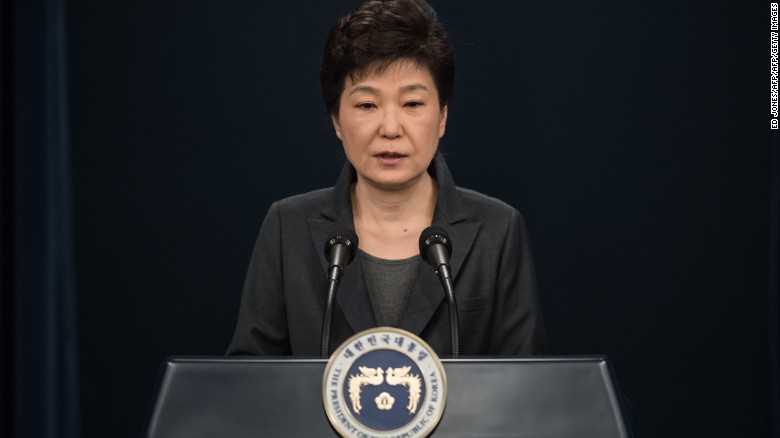 Members of parliament voted by secret ballot with 234 in favour and 56 opposed, meaning dozens of members of Park’s own conservative Saenuri Party backed the motion to remove her.

No fewer than 200 members of the 300-seat chamber needed to vote for the motion for it to pass.

Parliament speaker said seven votes were disqualified, two members abstained and one member did not participate.

Report says the Constitutional Court must decide whether to uphold the motion, a process that could take up to 180 days.

The Prime Minister, Hwang Kyo-ahn, immediately assumed Park’s duties on an interim basis.
Park, 64, is accused of colluding with a friend and a former aide, both of whom have been indicted by prosecutors, to pressure big businesses to donate to two foundations.

The two foundations were set up to back her policy initiatives.

Park, who is serving a single five-year term that is expected to end February 2018, has denied wrongdoing but apologised for carelessness in her ties with her friend, Choi Soon-sil.

Park has been under heavy pressure to quit but this week, said she would await the court’s ruling on the impeachment vote.

Mass rallies have been held in Seoul every Saturday for the past six weeks to press her to quit.

Parliament was closed to the public on the orders of the speaker.

Hours before the vote, anti-Park activists scuffled with police as they tried to drive two tractors up to parliament’s main gate, where over 1,000 protesters were gathered.

Police subsequently shut down traffic on a 10-lane highway in front of the parliament’s grounds and blockaded a bridge leading to the area.