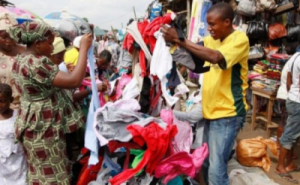 Some ladies in Lagos said they prefer buying fairly used pants and brassieres because they were durable and could get good bargain from market.

They disclosed in separate interviews on Friday in Lagos that their preference for fairly used pants and bras was due to the fact that such products were genuine and last longer than new ones.

Mrs Ann Adedeji, who was at Ikotun Central Market in Lagos, said that apart from durability, most of the fairly used pants and bras had trendy designs and were colourful.

She said, “I get more colourful bras and pants that are most times not available in boutiques and at the same time I get value for my money as they are durable.

“You can only get unique bra designs here because the Ikotun Central Market is the main place for fairly used underwears.”

Mrs Victoria Adejo, who was also at the market, said that it was after she suffered an embarrassing experience with a new bra that she decided to make do with fairly used ones.

She said the hook of the bra she was wearing came-off while she was in a meeting in the office and was left in uncomfortable position all through the meeting.

“Since that incident, I stopped buying panties and bras from boutiques,’’ she said.

She said, “it is a profitable business and I am growing in it.

“I have boutique owners who come to buy in bulk; they wash and package them and resell at exorbitant rates and I am aware.”

Miss Damilola Madu, who also deals in fairly used panties and bras, also says the underwears are durable and cheaper than new ones.

Madu added that used bras held the breast firmly and the elasticity was retained for a very long time, unlike new ones.

“Used undies are cheaper and last longer than new ones; that is the reason people come for it,” she said.

Meanwhile, Dr Ayoola Adeyemi, a dermatologist, warned against the use of fairly used bras and pants, saying it could cause bacterial infections.

The doctor noted that since the health status of the initial user could not be verified, it would be advisable for individuals to desist from such acts.

She added that “some bacterial infections could occur when we use fairly used panties because the health history of the initial user was not known.

“Skin rashes, eczema, syphilis and other bacterial infections may occur,” she said.