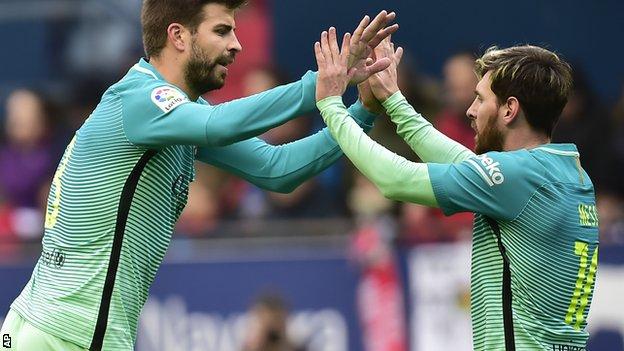 Lionel Messi scored twice as Barcelona reduced the gap to La Liga leaders Real Madrid with a dominant win against bottom side Osasuna.

Luis Suarez hit the post as the Catalan team dominated the first half but could not find a breakthrough.

Left-back Alba also provided the second, cutting back from the left byeline for Messi to clip into the far corner.

And the Argentina forward sealed a routine victory with a fine individual goal, dancing into space inside the home penalty area before drilling in.

Real, who started the weekend with a six-point lead over Barca, host struggling Deportivo La Coruna later on Saturday (19:45 GMT).

Barcelona’s bid for a third successive La Liga title has faltered in recent weeks, with a trio of frustrating draws enabling rivals Real Madrid to take charge of the title race.

Unexpected stalemates against Malaga and Real Sociedad, followed by Real’s last-gasp equaliser in last weekend’s El Clasico, left Luis Enrique’s side needing a morale-boosting win against a side they had lost just once against in 10 previous meetings.

And, barring Leon’s cheeky effort early in the second half, it was predictably routine for the visitors.

Inspired by the return of skipper Andres Iniesta, Barca enjoyed over 80% possession and created plenty of clear-cut opportunities.

However, both Messi and Suarez were wasteful in front of goal as Osasuna gamely tried to hang on.

Ultimately the pressure told after the break as Messi’s brace – taking him above Suarez and Real Madrid’s Cristiano Ronaldo to the top of La Liga’s scoring chart – made sure Osasuna are still searching for their first home win of the season.

We will find out if Real Madrid, without Cristiano Ronaldo, Karim Benzema (both rested) and Gareth Bale (injured) can restore their six-point advantage when they face Deportivo.

Barcelona are back in action next weekend when they host neighbours Espanyol on Sunday (19:45).