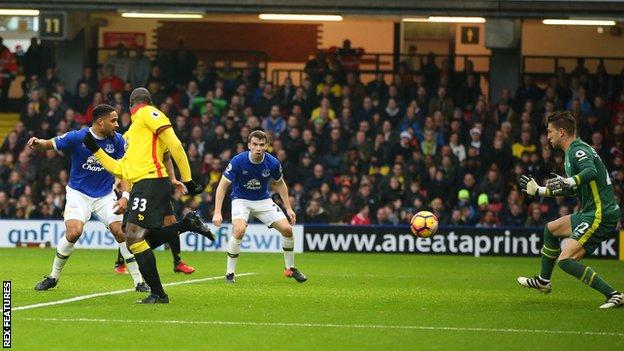 Stefano Okaka scored his first goals for Watford as they came from behind to beat out-of-form Everton in the Premier League.

Okaka, signed from Anderlecht in the summer, flicked in a superb backheeled effort in the first half, before heading home following a corner after the break.

In between, Sebastian Prodl powerfully nodded in from Jose Holebas’ whipped cross.

Everton had gone ahead on 17 minutes as Romelu Lukaku slotted in from Gareth Barry’s inch-perfect, first-time pass, and the Belgian headed in a late consolation.

The Hornets had lost three of their past four league games, and looked like stretching that sequence when they fell behind early on.

But they drew inspiration from striker Okaka’s stunning opener, the Italian’s first goal in the Premier League since scoring for Fulham in May 2010.

His second was helped by slack Everton defending, which allowed him to head in at the near post.

Despite their starting line-up featuring players of 11 different nationalities, Watford’s togetherness was clear – epitomised by the hard-working Etienne Capoue, who covered 9.33km and gained possession back nine times – more than any other team-mate.

Troy Deeney remains stuck on 99 club goals, though, and has now gone eight league matches without finding the net. He should have done better with a first-half effort he screwed wide.