Fire destroys goods worth millions of Naira in Benin supermarket 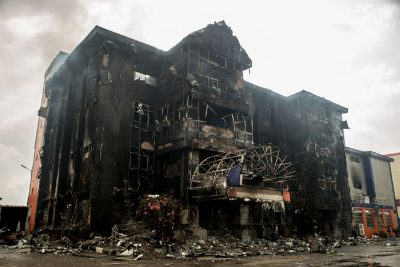 Few days to Christmas, goods worth millions of naira were destroyed in an early morning fire which gutted Phill-Hallmark Supermarket, one of the leading shopping malls in Benin, Edo State.

The fire which began at about 12 am on Sunday, completely destroyed the four floors of the main building, while an extension of the mall was partly burnt.

The supermarket with over 50 employees, has several sections, including a boutique, bakery, food and beverages as well as home appliances‎. It was recently renovated.

The fire was still raging at about 9 am of Sunday, as officials of Edo State Fire Service were seen battling to put it out‎.

‎Reinforcement by the fire service personnel of the Nigerian Airforce and the University of Benin, NPDC and IDSL, finally helped to extinguish the fire at about 11.30 am.

The incident attracted a large crowd of sympathizers. The manager of the mall decline declined to comment.

Among the hundreds of sympathisers who thronged to the scene was the State Governor, Godwin Obaseki, who inspected the level of damage.

Also present were the lawmaker representing Egor constituency in the House of Assembly, Crossby Eribo; the Executive Director (Enforcement) of the State Internal Revenue Service, Barrister Emmanuel Usoh‎, and a chieftain of the Peoples Democratic Party, Pascal Ugbome.

Commenting on the incident, Eribo said; “It is very sad. Even if we had a very good and controllable fire service, it still would have been very difficult because it is a large shopping mall.

“It is a massive loss at this festive period when people are trying to shop with the recession. In fact, I was in tears when I came.”

‎Also speaking, Usoh said, “We empathise with him and, at the same time, admonish him to give thanks because it could have been worse. No life was lost‎.

“We pray the good Lord to be able to resuscitate the funds to enable him (owner) carry on his business.‎”

Narrating how the fire started, a staff of the mall said: “Earlier this morning, I heard that a big supermarket was on fire. I shouted and called one of my friends, who got to the building around 3 am and confirmed it.

“When I came down to the place, it was very terrible. It was still burning then and everybody was shouting.”

‎The staff who didn’t want to be identified, said he was shocked to discover how bad the situation was.

Another employee attributed possible cause of the inferno to a wrong electrical connection.

“‎It is a big supermarket. We are just so sad. Nobody was expecting it; many of us were even supposed to resume after church.

“I think there was a wrong connection. There is an inverter there and it was not connected well‎. I think it caused the fire,” she said.

Customers who came to shop unaware of the fire incident, were dumbfounded.

One of them who identified herself simply as Grace, while condemning the poor response in extinguishing the fire, lamented; “I came to shop. But I am shocked because from what Hallmark has, this (destroyed property) is running into billions. How can a place like Hallmark burn down like this?”

Meanwhile, the State Governor, Mr. Godwin Obaseki, has said that full investigation would be conducted to establish the cause of the fire.

The governor who disclosed this on Sunday when he paid an on the spot inspection to the mall, also said investigation would be conducted into the activities of the State Fire Service.

Obaseki who was obviously shocked at the damage done to the mall described the damaged as catastrophic and a major disaster.

According to him, “This incident happening at this time of the year is a catastrophe. I have asked for written report and investigation into the cause of the fire.

“We will also investigate the claim by an official of the state Fire service on the allegation of lack of equipment, because I understand that trucks were distributed by the NDDC and the State Government during the last administration.”

He said that to avert future fire disaster in supermarkets and even vehicles, all vehicles and supermarkets would henceforth be made to have fire extinguishers.

The Managing Director of Hallmark, Mr. Philip Edigin, told the governor that the fire started at about 12 mid night. He disclosed that all effort to get the State fire service to come to their rescue proved abortive as the fire service told him they have no diesel to work.

Edigin said he was later able to get help from the Nigeria Air force fire service, IDSL NPDC and UNIBEN, before the State fire service came at about 6 am.

Meanwhile a supervisor in the State Fire Service Mr Franklin Agbonlahor appealed to government for urgent upgrade of facilities and equipment of the fire service station.