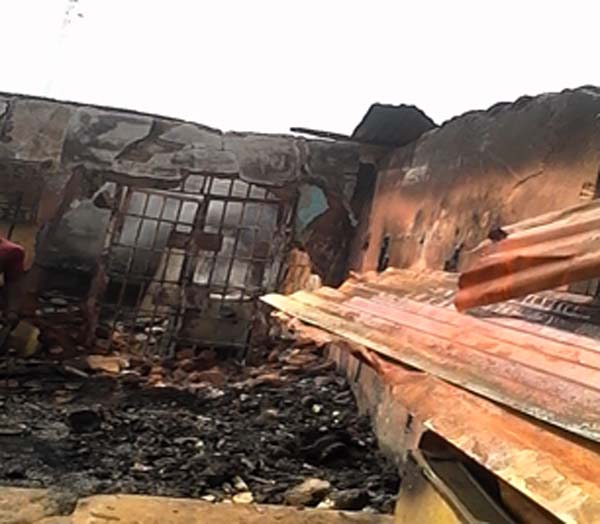 Eyewitness, Iyabo Mushin, said the fire which gutted the entrance to the building, started around 2am, and it was neighbouring house owners who alerted the authorities to it.

It was gathered that three persons who attempted to put out the fire sustained various degrees of injuries, as the fire was beyond what they could tackle.

Residents said they have been taken to a private hospital where they are currently receiving treatment.

An elderly man who witnessed the fire, Mr. Ogbueshi Joseph Nwandu, blamed the fire on poor electrical connection, adding the victims were lucky to have escaped death.

Investigation revealed that in the past few weeks, residents of Cable Point Quarters have been apprehensive, following the continuous sparks of cables on the electric poles in the areas whenever there was power supply.

At the scene of the razed market building, traders who had just returned from their market trips cried profusely as they watched helplessly.

One of the security men in the market, Nnamdi Paul, said the fire broke out after a prolonged sparks from the electrical cables’ switch boxes that were connected to the market building.

He said, “We were just doing the rounds when, suddenly, we observed that fire was coming out of the switch boxes connecting the entire market building. We ran for help, but it was to no avail.”

Traders whose shops were razed, one of them, Alhaji Lade Lawal, expressed shock about the incident, saying he had just stocked his shop PUNCH reports.

In his reaction, the state Commissioner for Special Duties, Mr. Chika Ossai, said the situation was was unfortunate, promising that the government would find the cause of the fire and prevent a recurrence.

Officials of the fire service in Asaba who spoke anonymously said they arrived the scene after the fire had wreaked havoc on the market.

As at the time of filing this report, some policemen were patrolling the area, so as to ensure that hoodlums do not exploit the situation to steal goods that were salvaged.