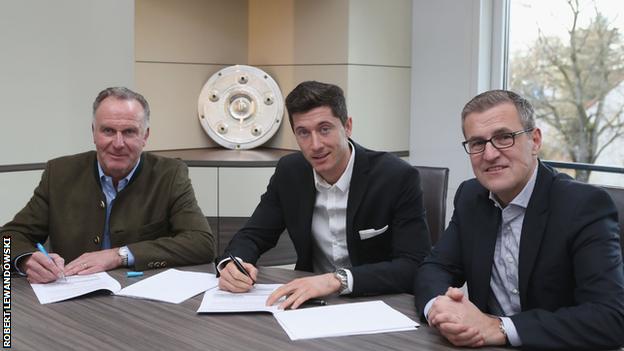 Bayern Munich striker Robert Lewandowski has signed a contract extension that will keep him at the Bundesliga giants until 2021.

The Poland international, 28, joined Bayern from Borussia Dortmund in 2014.

He has scored 86 goals in 122 appearances for the club, including 19 so far this season.

“I am very happy that the negotiations were successful,” Lewandowski said. “It means I will stay at Bayern for a few more years.”

Bayern, currently top of the Bundesliga, are bidding for a record-extending fifth consecutive league title.

They are also in the last 16 of the Champions League, where they will face Arsenal.

“I am happy that we managed to tie one of the best centre forwards in the world to the club for the long-term,” Bayern chief executive Karl-Heinz Rummenigge said.

“We have now guaranteed that another key player will continue to wear the Bayern shirt for the coming years.”

Lewandowski finished 16th in the Ballon d’Or voting on Monday as Cristiano Ronaldo won it for a fourth time.

Despite scoring 42 goals last season, he was not the highest-ranked player from the Bundesliga as Dortmund striker Pierre-Emerick Aubameyang ranked 11th.