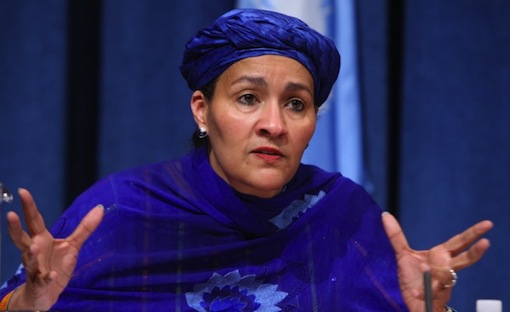 President Muhammadu Buhari has endorsed the appointment of the Minister of Environment, Mrs. Amina Mohammed, as the new Deputy Secretary-General of the United Nations, describing it as a welcome development.

In a statement issued by his Senior Special Assistant on Media and Publicity, Malam Garba Shehu, Buhari expressed happiness that Mrs Mohammed would join the next United Nations Secretary-General Antonio Guterres as his Deputy.

The statement said the president spoke with the in-coming Secretary- General, Guterres, who called earlier this evening to inform him (President Buhari) of his decision to pick Mrs Mohammed as the Deputy Secretary-General.

“President Buhari used the opportunity to reiterate his support and congratulations to Mr. Antonio Guterres on his upcoming tenure in the service.’’

According to the statement, the president endorses the “excellent selection of Amina J. Mohammed as the next Deputy Secretary-General of the United Nations.

“By her appointment, Nigeria has been honoured,” the President was quoted as saying.

President Buhari thanked Mrs. Mohammed for her untiring contribution to transform Nigeria and said he looked forward to sustained collaboration between the UN and Nigeria.

He said he had no doubt that she would continue to make Nigeria proud at the global level.

The statement added that: “It is expected that the Minister of Environment will be transitioning to her new role in March 2017.

“In the meantime, it is expected that she will continue to lay strong foundations with various important ongoing initiatives critical to the government’s success in the Environment sector.

“These include, but not limited to, implementation of our Nationally Determined Contributions (NDCs) under the Paris Climate Agreement, the successful launch of the Sovereign Green Bonds in 2017, the ongoing Ogoni cleanup and development of the Great Green Wall.”

Before joining the UN, Mohammed worked for three successive administrations in Nigeria, serving as Special Adviser on the Millennium Development Goals.

She provided advice on issues, including poverty, public sector reform and sustainable development, as well as coordinating poverty reduction interventions.

She is also an Adjunct Professor in Development Practice at Columbia University, and serves on numerous international advisory boards and panels, including the UN Secretary-General’s High-level Panel on Post-2015 Development Agenda.

Others include the Independent Expert Advisory Group on the Data Revolution for Sustainable Development, and the Global Development Programme of the Bill and Melinda Gates Foundation.

She is also a member of the UN Secretary-General’s Global Sustainability Panel, the African Women’s Millennium Initiative, Girl Effect and the ActionAid International Right to Education Project.

Born in 1961, and educated in Nigeria and the UK, Mohammed is married and has six children.

Guterres had hinted on Monday after he took the oath of office that gender parity would be top of his agenda as the UN scribe.

“I think that one very important element of the agenda would be to give a clear signal that gender parity is a must and so in the appointments I will be making.

“And the first ones would be announced soon. You’ll see that gender parity will become a clear priority from top to bottom in the UN and it will have to be respected by all.”

“This is a very ambitious agenda, an agenda that must be for both woman and man, and that is why parity is so important in our reform perspectives.

“That is also why the empowerment of women is so important in everything the UN will be doing around the world,” the incoming UN scribe said.