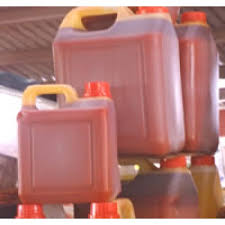 The prices of locally produced palm oil and ground-nut oil have jumped less than eleven days to Christmas.

A market survey conducted at markets within Owerri urban on Thursday, shows that 150cl bottle of palm oil sells for between N1, 400 and N1, 600, while ground-nut oil of the same measure, sells for nearly the same amount.

A dealer at Ekeukwu Owerri Main Market, Mrs Christiana Ogbonna said that retailers now buy 25 litres container of palm oil at N25, 000 as against the N18, 000 at which price they bought about a month ago.

Ogbonna, who attributed the increase in the price of the produce to the general downturn in the country’s economy, noted that palm oil was not that costly last year.

“Usually palm oil is expensive from October to January yearly, because these months are the periods when palm fruits are scarce due to low harvest from palm plantations.

“What is happening this year is frightening that 25 litres rubber of palm oil could go as high as N25, 000 and yet we have reached the period when palm oil price is expected to fall,’’ she said.

“Before now, we use to source palm oil which we supply to retailers from Adampalm and other locations with palm plantations, but with the closure of Adampalm, it is challenging to source palm oil,’’ Opara said.

NAN learnt that the Adampalm plantation with staff strength of more than 2, 000 and monthly revenue of more than N5 billion was shut down by Imo State Government due to intra-communal squabble by interest groups in Ohaji/Egbema area.

Opara appealed to the host community and government to urgently resolve the problem that led to the closure of Adamplam, noting that the plantation was crucial to the supply of red oil used daily for cooking.

Mr Hilary Uche, the National President of Oil Palm Growers Association of Nigeria (OPAGAN), told NAN that the price would rise further before it would plummet at the end of January.

“Nigerians should expect palm oil price to be even higher than what we are buying it this period by next year because we had yet to experience harmattan.

“This is because any year we have less harmattan, palm trees produces less,’’ he said.

The OPAGAN boss, however, reiterated his called on the Federal Government to look into oil palm plantation farming with a view to supporting the sector.

Uche insisted that apart from revenue generation, a lot of jobs would be created for the unemployed if government should inject huge fund in the palm oil sector.