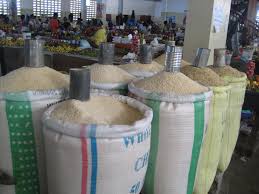 The smuggling of rice through the land borders has continued to thrive in Badagry area of Lagos State in spite of the Federal Government’s ban on the practice.

Markets along Badagry Expressway close to Seme border, are stocked with various varieties of smuggled rice, especially as the Christmas season approaches.

A smuggler, who identified himself as Sunday Egeseme, was seen offloading bags of rice from his car at Alaba Rago Market in Okokomaiko area of Lagos.

He described the business as “lucrative’’.

“We are messengers to the main owners of the goods who are in the Seme border.

“Transporting rice from Seme to customers in various location of the town is a fast moving business with good returns,’’ Egeseme said.

He, however, declined to say the exact amount it cost to ferry a bag of the commodity.

Egeseme, a driver, said that the Christmas period was the peak of the business as many families depended more on the consumption of rice.

At Doyin Bus Stop market before Navy Gate Market, Okokomaiko, a trader who could not find space at the Alaba rice market, was seen taking delivery of the product from smugglers.

A driver simply known as Taiwo, who was exchanging banters with his colleagues for a successful trip, said his target was to make a lot of money before the end of the season.

“I run three trips before morning breaks and two in the day time if the road is good.

“The security officers are there but we still find our way unless one is a new person on the route,’’ Taiwo said.

Mrs Celine Ukachi, a rice seller at the Navy Gate Rice Market, said, “we are used to selling the Cotonou rice because it is easy to get than the local ones.

“If we see the local ones, we sell together with the Cotonou one so that everybody who wants can buy,’’ Ukachi said.

The trader also claimed she had been in the business for four years.