City climb to second after beating Arsenal 2-1 at Etihad 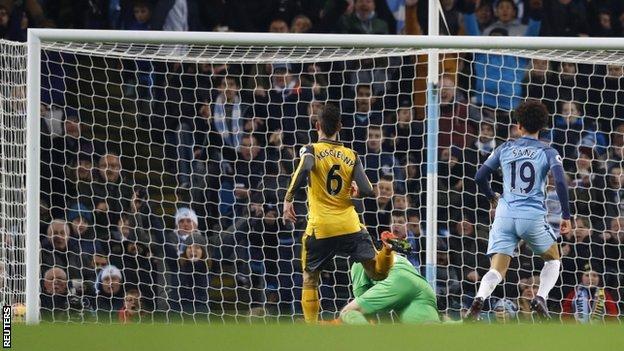 Leroy Sane scored two minutes after the break to get City back into the match.

Manchester City moved up to second in the Premier League table as Arsenal squandered a lead to lose for the second successive game.

Theo Walcott’s cool fifth-minute finish from Alexis Sanchez’s pass put the Gunners in control at the interval – but the second half brought a familiar painful fate for manager Arsene Wenger and his players.

As at Everton on Tuesday, they were overpowered and the credits were rolling once Leroy Sane ran on to David Silva’s pass to beat Petr Cech with Arsenal appealing in vain for offside.

City were on a roll and Arsenal were on the rack, the winner coming 19 minutes from time when Raheem Sterling was the beneficiary of Kevin De Bruyne’s brilliant pass to arrow a low finish past Cech at his near post.

It bolstered City’s title ambitions, although they are still seven points behind leaders Chelsea and completed a damaging double for Arsenal as they now lie nine points behind Antonio Conte’s side.

Manchester City needed their main man when they trailed at half-time – and in the absence of the suspended Sergio Aguero that role is assumed by De Bruyne.

And how the Belgian responded, delivering a virtuoso second-half performance crowned by that superb pass that led to Sterling’s winner.

De Bruyne was the driving force behind City’s second-half transformation that saw Pep Guardiola’s team wrestle control from Arsenal with a change of tempo and intensity that was simply too much for Arsenal to resist.

The same could not be said for Arsenal’s elite players and the main culprit was Mesut Ozil who, as in the fierce atmosphere of Goodison Park on Tuesday, shrank from the occasion and wandered around aimlessly and ineffectively on the game’s periphery.

Ozil is in the middle of what are likely to be very lucrative contract negotiations. Performances like this will diminish his hand in the bargaining rather than strengthen it.