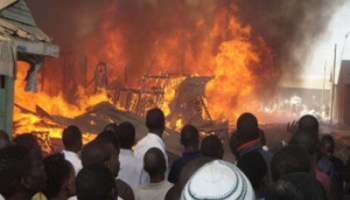 An early morning fire outbreak on Sunday razed some parts of Araromi Market at Agodi Gate, Ibadan, where used tyres and motor parts worth over N10 million were destroyed.

Mr Abdul Azeez Ojo, Chairman of the market, disclosed that the fire began at about 5.30 a.m.

According to him, the Fire Service was alerted and they responded promptly.

Ojo, however, said a sizeable number of shops equipped with tyres and other goods were razed before the arrival of the fire fighters at about 6 a.m.

“The Fire Service were able to put out the fire to avert more destruction, nevertheless, shop owners still suffered losses worth over N10 million.

“The most pathetic thing is that these burnt shops were owned by young traders who have just started business and we appealed to the state government to assist them,’’ he said.

Two victims of the incident, Hassan Olanrewaju and Michael Ajayi, whose shops were razed lamented the ugly incident.

They pleaded with the state government and other well-meaning Nigerians to assist them financially to enable them go back to business.

Mr Adeleke Isiaka, the Fire Service team commander, said his team arrived at the scene promptly when they received the call, adding the response time was impressive.

Isiaka said his team was able to put out the fire on time due to the cooperation received from the traders and sympathisers.

“The cause of the incident is yet to be ascertained, but it is possible that careless handling of cigarette butts may be responsible.

“I am saying this because there was no electricity light, nor any sign of cooking in the market at the time of the incident,’’ Isiaka said.

Men of the Nigeria Police and Nigeria Security and Civil Defence Corps (NSCDC) were on ground to prevent looting of shops by people with such motive.

Mr Moshood Adeyemo, the team leader of the NSCDC said that his men arrived at the scene at exactly 6 a.m. to secure the area.

He said the operation was quite successful, saying no life was lost.