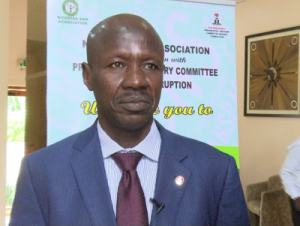 The Socio-Economic Rights and Accountability Project (SERAP) has petitioned the United Nations for refusing to confirm Mr Ibrahim Magu as substantive chairman of the Economic and Financial Crimes Commission (EFCC) over false security report.

SERAP wrote to Mr Michel Forst, UN Special Rapporteur on the situation of human rights defenders over alleged “intimidation, harassment and unfair treatment of Mr Ibrahim Magu, by the Senate of the Federal Republic of Nigeria apparently working with other agencies of government to use a purported security report that is politically motivated to reject Mr Magu’s confirmation as substantive chairman of the EFCC.”

SERAP said that “by relying on a report they knew or ought to know is baseless and politically motivated to reject Mr Magu’s appointment as chairman of the EFCC, the Senate of Nigeria has flagrantly violated his right to a fair hearing, and is implicitly working to weaken, intimidate, harass and ultimately undermine the independence and freedom of action of the EFCC in its efforts to combat high-profile official corruption.”

The organization urged Mr Forst to “urgently intervene in this matter to stop further intimidation and harassment of a prominent anti-corruption campaigner and human rights defender.”

In the petition dated 16 December 2016 and signed by SERAP executive director Adetokunbo Mumuni the organization said that, “SERAP believes that the action by the Senate of Nigeria and other agencies of government apparently working with them undermines and violates Nigeria’s international obligation to respect, protect, promote and fulfil the human rights of the citizens, which inevitably creates a duty for the government to establish efficient and independent anti-corruption mechanisms.”

The petition reads in part: “apart from the fact that the allegations against Mr Magu are baseless and politically motivated, the Senate of Nigeria flagrantly denied him constitutionally and internationally guaranteed right to a fair hearing by not providing him an opportunity to respond to the allegations against him. The Senate confirmation hearing therefore amounts to a nullification, or destruction of the very essence of the fundamental principles of fair hearing.”

“The Senate of the Federal Republic of Nigeria relying on a baseless and politically motivated report declined to confirm the appointment of Ibrahim Magu as substantive chairman of the country’s leading anti-corruption agency, the Economic and Financial Crimes Commission (EFCC). The Senate claimed that its action was based on a purported security report forwarded to it by the State Security Service.”

“But SERAP has reviewed the security report, which primarily alleged that sensitive and unauthorised EFCC official documents were found in Mr. Magu’s home. However, SERAP is aware that this allegation was part of the conspiracy to harass Mr Magu and frustrate his anticorruption work, as he was unjustly detained for three weeks. Following investigation by the police authorities in 2008, Mr Magu was subsequently cleared of any wrongdoing, and in fact promoted to the rank of Assistant Commissioner of Police.”

“The report also incorrectly stated Mr Magu currently occupies a residence rented for N40 million at N20 million per annum and paid for by allegedly corrupt person. But SERAP’s finding shows that the property was in fact paid for by the Federal Capital Development Administration.”

“SERAP thus believes that the purported rejection by the Senate of Nigeria of Magu’s appointment as the chairman of EFCC is politically motivated and in bad faith and part of a persistent move by the National Assembly of Nigeria including the Senate and the House of Representatives and other agencies of government apparently working with them to undermine the ongoing fight against corruption which Mr Magu is leading, and invariably, the independence and freedom of action of anticorruption agencies including the EFCC.”

“SERAP is deeply concerned by intimidation, harassment and politically motivated allegations against one of the most efficient, focused, consistent and hardworking anti-corruption campaigners in our country. These politically motivated allegations are not only to victimize him as the head of EFCC but also to harass, intimidate and frustrate the work of other anti-corruption and human rights campaigners and institutions in the country.”

“SERAP considers Mr Magu to be a human rights defender within the provisions of the UN Declaration on the Right and Responsibility of Individuals, Groups and Organs of Society to Promote and Protect Universally Recognized Human Rights and Fundamental Freedoms of 1998 (UN Declaration on Human Rights Defenders).”

Tags:   The Senate   The Socio-Economic Rights and Accountability Project (SERAP)   The United Nations