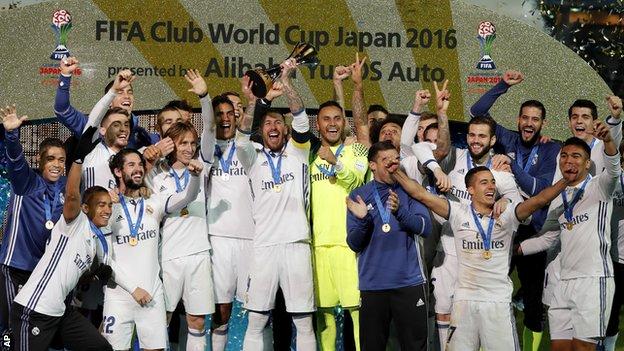 Cristiano Ronaldo scored a hat-trick as Real Madrid survived a scare to beat Japanese side Kashima Antlers in extra time and win the Club World Cup.

Real took the lead in the ninth minute through Karim Benzema, but Gaku Shibasaki scored either side of half-time to put Kashima in front.

Ronaldo levelled from the penalty spot on the hour mark after Lucas Vazquez was fouled by Shuto Yamamoto.

The Ballon d’Or winner put his side ahead in extra time after being played through by Benzema, and completed his hat-trick seven minutes later.

Victory gave Real their second Club World Cup and extended their unbeaten run to 37 games in all competitions.

It also means nine of the past 10 winners of the competition have come from Europe.

The Champions League winners looked set for a comfortable afternoon when Benzema put them ahead, and they dominated possession in the opening stages.

But Kashima – the first Japanese team to reach a Club World Cup final – impressed in an entertaining game, and Shibasaki took both goals well.

First Keylor Navas saved a long-range strike from Fabricio, then Yasushi Endo shot wide at the back post with the final kick of the 90 minutes. At 3-2 down, Yuma Suzuki hit the bar with a header.

The Japanese side also felt Real captain Sergio Ramos should have been sent off in normal time when he appeared to body-check an opponent when on a yellow card.

Referees used video replays to review several decisions during the competition, but Janny Sikazwe chose not take a second look at this incident.

Victory for Ronaldo capped an impressive year for the forward, coming six days after he won the Ballon d’Or, awarded to the world’s best player.

He scored the winning penalty in Real’s Champions League final victory over Atletico Madrid in May, before captaining Portugal to Euro 2016 success in the summer.

His hat-trick in Yokohama was the first in a Club World Cup final, and he is now the joint-top scorer in the competition’s history with five goals.

“What a game,” said Ronaldo. “We had to suffer, but that’s what finals are about. It’s a trophy we really wanted to win and we end the year in the best way possible so I’m very happy.”

Ronaldo has now won the Club World Cup three times, having done so previously with Manchester United in 2008 and Real in 2014. He was already the only player to win the competition with two different clubs.