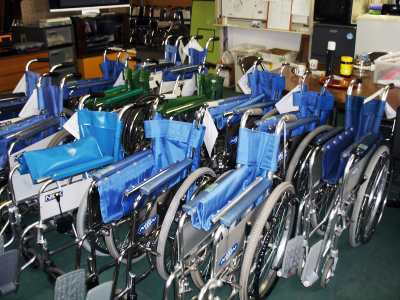 Gov. Umaru Al-Makura of Nasarawa state on Monday, donated wheelchairs to 54 physically challenged persons in the state to facilitate their mobility.

Al-Makura, represented by Hajiya Hajara Danyaro, Special Adviser on Gender, Rehabilitation and Disability presented the wheelchairs to the beneficiaries at the state rehabilitation board in Lafia.

He said that the gesture was to ameliorate the plight of the beneficiaries as part of his administration’s commitment to better the lives of the less privileged in the state.

The governor noted that physically challenged persons in the state were being accorded priority in his administration’s policy to give them a sense of belonging.

Al-Makura advised the beneficiaries not to be discouraged by their physical challenges but be focused and determined to achieve their goals in life.

Alhaji Jibril Dan-Ogaji, Executive Secretary of the Nasarawa State Rehabilitation Board, in his remarks, lauded the governor for putting smiles on the faces of the beneficiaries.

Dan-Ogaji said that the gesture would go a long way in improving the living standard of the physically challenged persons.

He said that the beneficiaries were drawn from Doma, Lafia, Obi and Keana Local Government Areas of the state.

Mr Osakede Solomon, State Secretary, Joint Association of Persons Living with Disabilities, describe the governor as a friend of the physically challenged.

Solomon commended the governor for rekindling the of the hope of the people with disabilities to live their dreams.