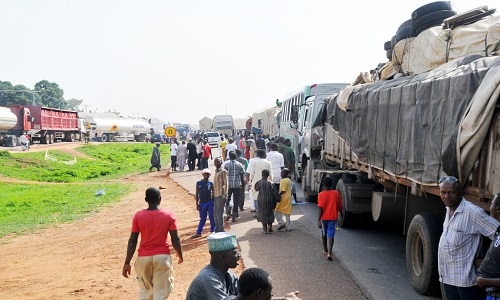 Protesting truck drivers have blocked the Abuja-Lokoja-Okene highways since the early hours of Monday, the News Agency of Nigeria (NAN) reports.

The drivers were protesting the N10,000 daily tax imposed by the Kogi State revenue Service.

The state government, police and the Federal Road Safety Corps were, however, taking measure to ensure free flow of traffic.

No official reaction yet from the state government but the state police Commissioner, Mr Badulahi Chafe is currently in a meeting with the leadership of the truck drivers to end the blockade.

One of the motorists trapped in the gridlock, Mr Isaac Ighure said that he had remained on the same spot on the road for over three hours .

Igure described the development as bad for the state and the country, especially when it is happening few days to Christmas.

The gridlock has stretched to over 30 kilometres as at the time of this report.

The meeting with officials of the truck drivers is holding at the state police command headquarters.

The Police Public Relations Officers, ASP William Aya, who confirmed this to NAN said that the issue would be resolved soonest in order to ease the hardship on motorists and the travelling public.