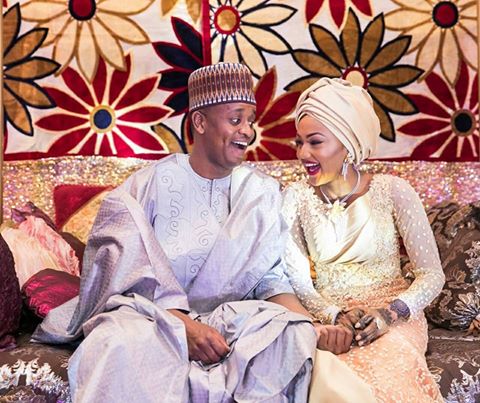 The wife of the President, Mrs Aisha Buhari, has expressed profound gratitude to friends and well wishers who joined her in prayer during and after the wedding of her daughter, Zahra Muhammadu Buhari.

Mrs Buhari, who expressed the appreciation on her facebook page on Tuesday, prayed that God would assist mothers in Nigeria to witness successful wedding of their daughters.

” On behalf of my family, I express my profound gratitude to friends and well wishers who joined me to celebrate the wedding of my daughter, Zahra.

” It is my prayer that God will make it possible for us to all witness same with our children, thank you and God bless us all,” Mrs Buhari said.

President Muhammadu Buhari on Friday gave out Zahra in marriage to Ahmed Indimi, a businessman from Borno.

A representative of the Indimi family, whose name was not disclosed, paid 12 gold coins which was converted and valued at N250,000, for the dowry.

The Sarkin Fulanin Daura, Alhaji Yusuf Sani, gave out Zahra on behalf of the Buhari family.

Buhari, who arrived National Mosque at about 2:00pm was accompanied by the President of Guinea Conakry, Alpha Conde and other aides of the president.

The bride (Zahra) is the seventh child of President Buhari.

The groom (Ahmed Indimi) expressed his happiness and thanked friends and well wishers who took time to celebrate with them.