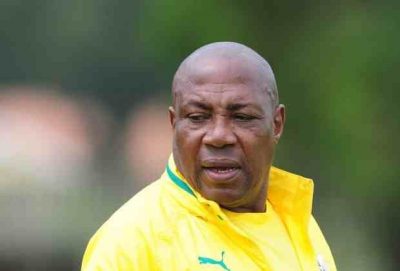 Ephraim Mashaba has been sacked as South Africa coach, the country’s football association confirmed on Thursday.

His sack was coming weeks after leading the side to a crucial World Cup qualifying victory over Senegal last month.

This happened directly after the 2-1 victory over Senegal on November 12.

Mashaba was reportedly unhappy at what he perceived was a lack of support from his superiors.

He has had several scrapes with South African Football Association (SAFA) officials during four stints in charge of the side.

“Due to the seriousness of the coach’s actions, we had to release our head coach with immediate effect,” SAFA CEO Dennis Mumble said in a statement on Thursday.

South Africa are second in their qualification pool, behind Burkina Faso on goals difference, having managed four points from their opening two games.

Only the top team in each pool will advance to the 2018 tournament in Russia.

The side did not qualify for the African Nations Cup finals in Gabon starting on January 14, and are next in action when the 2019 Nations Cup qualifiers kick off in March.